BYU Or Kansas State? Who To Root For (And Against) In The NCAA Tournament

The NCAA Tournament is almost here, but before you pick your brackets, remember: You have to root for the teams you to pick to advance. So do you really want to pick Duke or BYU? Because it would be a lot more fun to root for insane Frank Martin and Jacob Pullen's crazy beard.

Share All sharing options for: BYU Or Kansas State? Who To Root For (And Against) In The NCAA Tournament

The 2011 NCAA Tournament begins this week, and the biggest reason March Madness is such a success every year is that everyone has a rooting interest. So how do we choose our favorites?

Well, duh. You root for whoever you picked in your bracket.

It's a perfect example of how gambling makes everything more fun. Las Vegas, for instance, doesn't have a pro sports team. But whenever you watch NFL or NBA games in a Las Vegas sportsbook, it's like being in the most passionate sports bar in the world. Why? Because everybody's got money on it, so they cheer like the biggest diehards around. March Madness turns America into that sportsbook.

We don't have any close relationship to the players and teams that'll drive us crazy over the next few weeks, but the second we pick a team like BYU to go to the Final Four, a player like Jimmer Freddette becomes our favorite player in college basketball. I'm telling ya, gambling on someone is the fastest way to become a fan of anyone, anywhere. And at no other time of the year will you see so many rational people gambling on teams and players they know nothing about. It's great.

But that doesn't mean we should ignore rooting interests altogether. Like, yes, you'll root for whoever you pick this week. But if you know that up front, shouldn't you try to pick a few teams that'll be fun to root for? And avoid picking teams you'd rather root against?

The thrill of rooting for a likable team to make a run is so much better than picking your bracket based on what Jay Bilas says. Likewise, the thrill of picking against a team that you absolutely hate is more fun than pretending you like Duke for the next three weeks.

I'm so glad my editors asked me to ask these questions, because now I'm here to answer them! Without further ado, here's five teams to root against, and five to make your favorites. 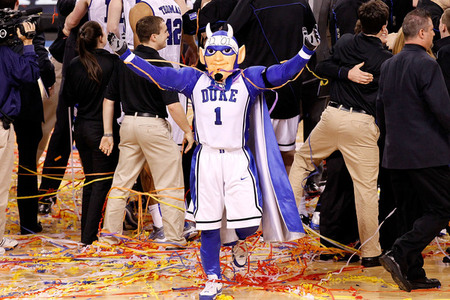 WHO SHOULD WE BE ROOTING AGAINST?

As I wrote last March, "Duke basketball, as an entity, embodies a suffocating blend of hubris and hypocrisy. It represents the worst elements of America; abuse of power, favoritism, double-standards, and a two-faced capitalist like Coach K profiting from it all. It's not cliché to root against a team like that; it's downright patriotic. The Blue Devils could switch rosters with any team in the Final Four, or any team in the country. It wouldn't matter. In the end, Coach K is still their leader, and the fans, his followers, are still some of the most insufferable people you'll ever meet." Also, if you pick Duke, you have to pretend Kyle Singler is good. And nobody wants that, do they?

2. Pittsburgh. People love to say that the Pitt Panthers have a knack for "winning ugly." And technically, that's true. They tend to win, and GAWWWWWD they play ugly basketball.

But we shouldn't want them to win, right?

Maybe there's something admirable about being able to win a basketball game without scoring 60 points, but that doesn't mean it's fun for the rest of us. The longer Pittsburgh sticks around in the Tournament, the longer we'll have to endure their joyless, brutal brand of basketball. They're like the '90s Knicks, but there's no Latrell Sprewell to make this entertaining. Maybe if they actually started brawling on the court, this would be different, but as it stands, Pittsburgh just turns basketball into a mediocre mess of missed jumpers, charges, and ugly putback layups.

Another factor working against their likability? For some reason, they wound up with the easiest draw of any one seed in the tournament, improving the chances that we'll all have to continue to pretend they're a great team. Please, someone, anyone, beat Pittsburgh.

3. Florida. Another team that doesn't actually have good players, but was somehow shoehorned into the field as a favorite. Forget the controversy over VCU and UAB getting in; how and why did Florida end up with two-seed in the NCAA Tournament? Earlier this season I watched them win the worst good game of all time and came away thinking, "Wow, I can't WAIT to pick against that team in March." Also: On the scale of sleazy college basketball coaches, Billy Donovan doesn't get nearly enough credit. 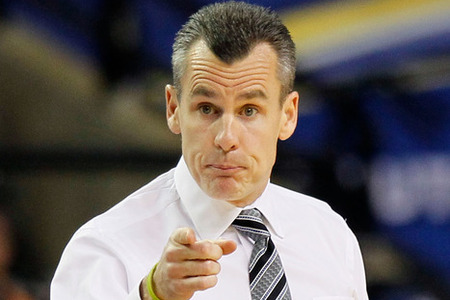 4. BYU. "Hey, did you know BYU suspended one of their best players?

"Yup. BYU's got the strictest honor code in the country. It prohibits premarital sex!"

"Yeah, I mean, say what you want about the values out there in Provo, but isn't it refreshing to see someone actually be held accountable for their actions in 2011?"

...I promise you, the longer BYU plays in the NCAA Tournament, the more times you'll hear the above conversation, and the more annoying it will get. And... No offense to Jimmer Freddette, but you know what would be most refreshing?

If BYU lost to Wofford in the first round, and everybody worshiping BYU's sacrosanct virtues had to concede, "Well, shit, they probably could have used Brandon Davies this week."

5. Notre Dame. Because Notre Dame is basically Pittsburgh with less talent, Mike Brey is a descendant of Duke basketball, the "Notre Dame's academic standards" storyline is almost as overplayed as BYU's honor code, Ben Hansbrough is a poor man's Jimmer Freddette. Basically, Notre Dame is a more mediocre version of every team on this list. And if we're penalizing Florida for Billy Donovan, than we'd be remiss not to mention Mike Brey's terrible turtlenecks. 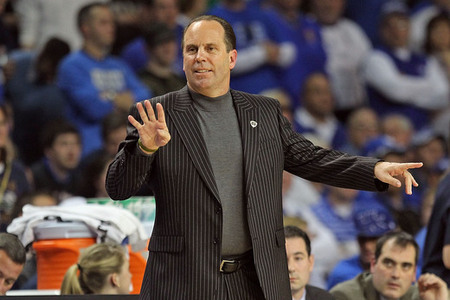 Others receiving votes include Kansas, Every Big East Team, Texas, and Jim Nantz. But now we get to the fun part... Here's who we should be rooting FOR this week.

WHO SHOULD WE BE ROOTING FOR?

But none more convincing than Pullen's awesome, awesome beard, and the cult following it inspired last spring. I, for one, am ready for another month of worshiping at the altar of a chinstrap beard. 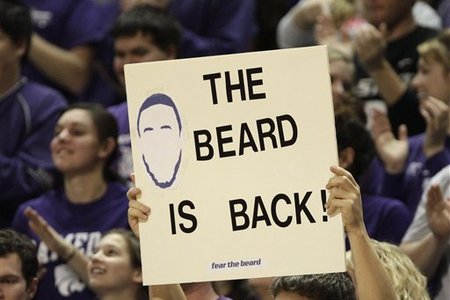 2. San Diego State. As an underdog pick, San Diego State doesn't have the cache of BYU, and they don't have a superstar like Jimmer Freddette. But that's just the point! Where most people will probably take BYU to make it to the Sweet 16, everybody in the world is going to pick UConn to beat the Aztecs, and they might even take Temple or Penn State to knock 'em off before they get there. Want to follow the pack and get on BYU's bandwagon? Fine.

But if underdogs are underground rock bands, BYU is Kings of Leon at this point, and San Diego State is the Black Keys. Choose who you want, but Steve Fisher and Kawhi Leonard are both pretty great, and for the record, that Brothers album blows KOL out of the water.

3. UAB and VCU. Because nothing would be better than for these two teams to make everyone look stupid after the sports world spent the past 48 hours complaining about their inclusion in the tournament. As far as that whole thing was concerned... WHO. CARES.

Really, anybody that pretends there's a big difference between UAB and Virginia Tech is full of crap, anyway. It's always a crapshoot to see who gets off the bubble every year, so some of the meanspirited talk toward VCU and UAB was just ridiculous. So with that said, here's to hoping this random group of college kids makes a bunch of stodgy old sportswriters eat their words.

4. Washington. They were mentioned in yesterday's piece, so we'll keep this short. But just to reiterate: There's no better example of a team that could make a deep run in March and shock a couple of big name schools (UNC, Syracuse) along the way, with a star player (Isaiah Thomas) that the whole country will fall in love with if they do it. It could be a pretty fun ride for the Huskies.

Plus, Seattle hoops deserves some good fortune after what David Stern and Clay Bennett did to that city, and UW still hasn't gotten reparations for the atrocity that was the UConn-UW officiating five or six years ago. So as long as UW is in the tournament, I'm pulling for 'em.

A rag tag bunch of lovable role players? Hell yeah. Jon Diebler really isn't that much different from Mark Titus, David Lighty is the prototypical good-but-never-great perimeter shooter, and William Buford is pretty average, too. But together, and along with a handful of other role players, the Buckeyes can light it up. It still doesn't make sense, but watching them play is actually FUN, and watching them win this way is still pretty amazing. Pretty much everyone on Ohio State was underestimated, including Sullinger, who most figured would be too slow to dominate in college.

But here they are, the number one overall seed in the NCAA Tournament, and the favorite to win outright. Nobody wants to look like a front-runner here, but really, there's never been a more likable favorite in the NCAA tournament, and they may not win in the end, but we can say this much: if you get behind Ohio State, they may not win your bracket for you, but rooting for them will be a hell of a lot more fun than picking Duke. 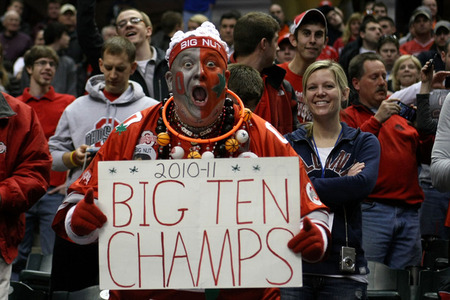 BONUS: I think we're all rooting for Louisville to advance, and if you're not, then you should be. Peyton Siva's a lot of fun to watch, yeah, but kind of like how BYU forces us all to talk about their honor code, a Louisville run would just give us more and more opportunities to remember this with cheap jokes about illegal dribbles and three second violations. GO CARDS.