Derrick Williams has certainly had his share of highlights during the 2011 NCAA Tournament. Whether it was his game-saving block against the Memphis Tigers in the second round or his game-winning layup against the Texas Longhorns over the weekend, the sophomore forward has found a knack at being involved in the decisive moment of a game this March.

While not in the same category, Williams' putback jam early in Arizona's Sweet 16 game with Duke on Thursday night still adds to the spectacular. Duke's Kyle Singler had just put his team up by three when Arizona's Jordin Mayes drove the ball up the court, only to miss the layup from several feet out. But Williams, stalking the play, rose from the low post area and delivered a one-handed jam into the net. 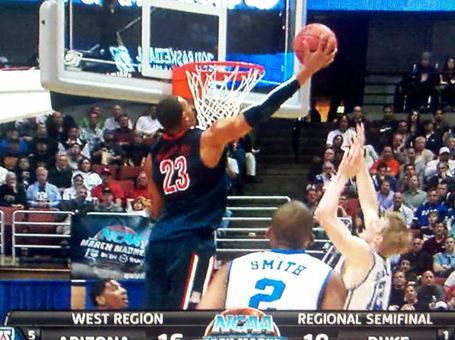 By the look of things, Singler may be shielding his eyes from the awesome spectacle of the dunk. Can Williams bring that same game to the NBA?

After the jump, video highlights of Williams' dunks from Arizona's Sweet 16 win over Duke.

Check the full NCAA Tournament Sweet 16 schedule, and see predictions and previews for each game.