Bradford Burgess scored a layup off a bounce pass from Joey Rodriguez with 7.1 seconds left in overtime, and 11th-seeded VCU made it to the Southwest Regional final of the NCAA Tournament with a dramatic 72-71 squeaker over No. 10 seed Florida State.

It was VCU coach Shaka Smart who drew up the great inbounds pass that worked to perfection. With the win, the Rams ensured there will be one team from the city of Richmond in the Elite Eight.

As for Shaka, he was pleased with his team's effort. And by pleased, I mean he went friggin' nuts: 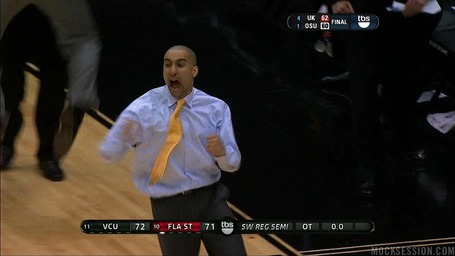 See, this is why it's great to have teams like VCU make these runs. Did you see Roy Williams and Bill Self after their team's Sweet Sixteen wins? Both of them couldn't wait to hit the golf course. Sweet Sixteen wins became old hat to them years ago.

Not Shaka. And certainly not VCU.