Sports Illustrated has released (via Sports By Brooks) the cover of their 2011 NFL draft preview which includes three quarterbacks: Cam Newton, Blaine Gabbert and Jake Locker. Newton and Gabbert are expected to be the first two quarterbacks selected and Locker is among a group of several others hoping to be the third quarterback picked.
Here's the cover: 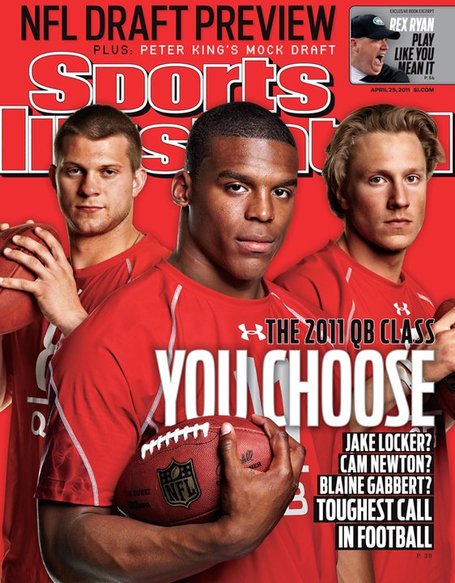 Which one of these is unlike the other?
The "Toughest call in football" probably shouldn't include Locker, who is widely believed to be a step below Newton and Gabbert. I do believe, though, that it's possible all three are top 10 picks. Newton and Gabbert should be gone within the first five picks and Locker could go as high as eighth to the Tennessee Titans. I could also see him going 10th to the Washington Redskins. Of course, that assumes that Locker will be picked ahead of QB Ryan Mallett, which isn't a sure thing.