Andy Dalton has red hair, and I am not talking about your general strawberry blonde, either. His hair is as red-orange as a radioactive tangelo. Orangutans would describe it as "WHOA." Sunsets slow down when Dalton goes on beach vacations to watch him walk over the horizon. In a box of crayons, it is listed as "Andy Dalton's hair." 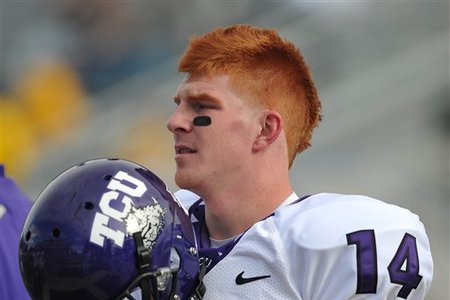 "Has there ever been a red-headed quarterback in the NFL who's really done well?" a coach asked the media last week. "It sounds idiotic, but is there any way that could be a factor? We've wondered."

Besides having no souls and all being witches? In actual science, redheads take 20% more anesthesia to get knocked out, but have the added twist of feeling pain more acutely than non-redheads. Nature's fun like that! In conclusion: Andy Dalton may actually be tougher than other quarterbacks because of his hair color, ginger prejudice is real at the NFL level, and NFL scouts are basically just guessing 24/7 and making it look like hard science.