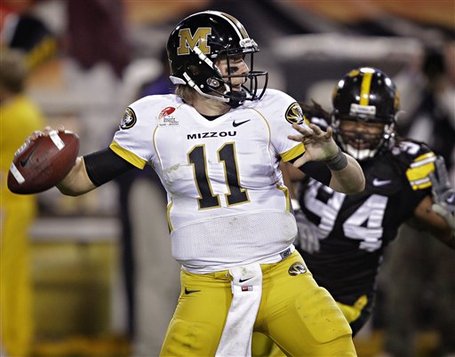 The Washington Redskins have traded the 10th overall pick to the Jacksonville Jaguars. With the pick, the Jaguars have selected Missouri QB Blaine Gabbert. Jacksonville finally has their quarterback of the future in Gabbert and, with David Garrard in house, could even let Gabbert sit for a year. This is a solid move for the Jaguars, who only had to move up six spots.

Of the quarterbacks in the 2011 NFL Draft, Gabbert may be the safest pick. Gabbert checks in behind Cam Newton on many big boards, but possesses the physical tools to be successful in the NFL. He's not a freak athlete, but he has a strong arm and put up impressive stats in 31 games at Mizzou. Gabbert threw for 6,822 yards and 40 touchdowns at Missouri, ranking him among the top-five all-time in each category despite just two full years as the starter. And he did it all without the benefit of an outstanding supporting cast.

Gabbert is good at everything, but not necessarily great at anything. He's a solid all-around quarterback who can move within the pocket and make all the throws necessary. But, like many quarterbacks at the college-level, he will have to transition from a spread to a pro-style offense, learning to take snaps from under-center and make reads while dropping back. While his arm isn't at Ryan Mallett levels, he can spin it, and watching him throw leaves a lasting impression.

Here's video of Gabbert's second half against Nevada in 2010.

Check out Big Cat Country for more on Blaine Gabbert in Jacksonville.

The first round of the 2011 NFL Draft started at 8 p.m. (ET) on Thursday, April 28th, and SB Nation has everything you need to keep up with it: news, rumors, player profiles, scouting reports, the full NFL draft schedule, NFL mock drafts, draft projections and more. Check it all out at SB Nation's NFL Draft hub and our NFL Draft blog Mocking the Draft.

NFL Draft 2011, Round 1: Full Rundown Of Every Opening Night Pick