With the 245th pick in the 2011 NFL Draft, the Buffalo Bills selected Michael Jasper, a defensive tackle from Bethel College in Tennessee. But Jasper is no ordinary man. In fact, the Bills decided to go big with their final selection, choosing the largest hunk of man in the 2011 NFL Draft class. Jasper tips the scales at a jaw-dropping 394 pounds and may be the definition of a space-eater.

But, to be honest, Jasper doesn't look like a man pushing four-bills. In fact, he looks quite athletic for his size, though he is a mountain of a man. Surprisingly, Jasper has some wheels, and was clocked at 5.58 in the 40-yard-dash. That's a lot of mass moving at a high-rate of speed.

The video doesn't quite do him justice, so check out this picture. 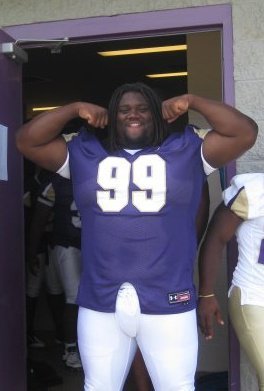 While it's unlikely Jasper is more than a practice squad guy, he does look like a fun one too keep an eye on. I imagine him pushing semi's for fun and have a feeling he may be able to literally run through a brick wall for his team.

Head on over to Buffalo Rumblings for more on Jasper and the Bills.