Super Bowl Halftime Shows, And The Wardrobe Malfunction That Changed It All

It was maybe the most memorable moment in Super Bowl history, but it had nothing to do with football. On the seven year anniversary of Janet Jackson's "wardrobe malfunction" at Super Bowl 38, let's relive the madness, and where it's gotten us.

Share All sharing options for: Super Bowl Halftime Shows, And The Wardrobe Malfunction That Changed It All

On Feb. 1, seven years ago, the New England Patriots beat the Carolina Panthers in Super Bowl 38, winning their second Super Bowl in three years. For the first time since the mid-90s, the NFL had a legitimate dynasty brewing, with Tom Brady positioned as the Joe Montana of his generation.

'Course, the next day, everything you heard about Super Bowl 38 had nothing to do with football. The halftime show that year starred Janet Jackson and Justin Timberlake, and was produced by MTV. You remember it. Chances are, you remember much better than the game.

I was in a friend's basement for that Super Bowl, and most of us checked out during halftime to refill our drinks, play darts, or just, you know, find something better to do than watch some 10-minute Justin Timberlake concert. What were we doing? I don't really remember, exactly.

But I definitely remember one of my friends shouting: "WHOA. Was that a boob?!"

We immediately hit rewind on the TIVO and a closer inspection revealed that yes, it was 100% a boob. Janet Jackson's, to be exact. And my memory's not perfect so this could be wrong, but I'm pretty sure the next thing me and my 17 year-old friends said was, "AWESOME."

And then: "Somebody definitely screwed up on that one." ... Oops. 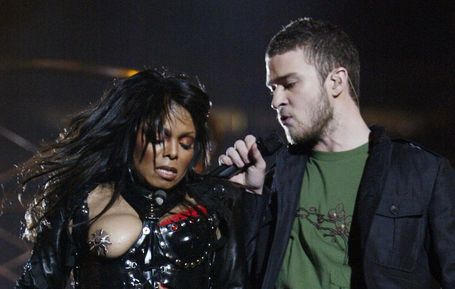 Almost immediately, the authorities claimed it was a "wardrobe malfunction." But if it was a wardrobe malfunction, we wondered, then why was she wearing that ridiculous thing on her nipples? Does Janet Jackson just wear ornate nipple rings all the time?

Whatever the context, though, it was a pretty hilarious surprise. But that was it. I mean, it's not like it changed the way we watched the second half. It was hilarious, but harmless. Poor judgment from two pop stars that are paid to push the envelope and entertain people. Whatever, right?

Ehh... Not so much. The next day, Janet Jackson explained it was planned. And she apologized. "The decision to have a costume reveal at the end of my halftime show performance was made after final rehearsals," she said. "MTV was completely unaware of it. It was not my intention that it go as far as it did. I apologize to anyone offended -- including the audience, MTV, CBS and the NFL."

That wasn't the end of it, though. After all, this was the Super Bowl, the preeminent television event of the year, and the embodiment of all things American (advertising, mostly). If the Super Bowl's suddenly descended into this horrible, pornographic netherworld, what does that say about the state of our morals as a nation?

As one U.S. Senator wrote in the wake of the controversy, "The culture of far left America was displayed in a startling way during the Super Bowl's now infamous half-time show." See, you may remember Janet Jackson's nipple, but it's easy to forget the screeching outrage that came next. As Senator Zell Miller continued:

I asked the question yesterday, how many of you have ever run over a skunk with your car? I have many times and I can tell you, the stink stays around for a long time. You can take the car through a car wash and it's still there. So the scent of this event will long linger in the nostrils of America.

Who could we blame though? Well, as another writer put it, it was another conspiracy from CBS to foist their depraved values on a nation. Think of the children! And the Muslims!

CBS is the same network that several months ago tried to air a malicious, full-of-false-dialogue caricature of Ronald and Nancy Reagan ... CBS is determined to move America politically to the left and culturally to the sexually deviant.

The radical Muslims who criticize our culture as degraded and demoralizing now have new proof for their charges. Who is going to answer them?

Not only did they try to make fun of President Reagan, but CBS was clearly trying to turn America into a nation of prostitutes and johns. Maybe the terrorists were right!

So, parents protested. Boycotts were launched. The chairman of the FCC, Michael Powell, announced there would be an investigation into the halftime show, which was nothing more than "onstage copulation." Eventually, the FCC issued record fines to CBS and Viacom for their role in the affair. All because of halftime show, and a breast exposed on TV for less than a second. Kind of amazing.

So why is this relevant today? Well, two reasons. First, duh: It's the anniversary of arguably the most famous moment in Super Bowl history! I mean, every sports fan remembers David Tyree's helmet catch, but everyone remembers Janet Jackson's wardrobe malfunction.

And it's still relevant today, because we're still feeling the aftermath. Have you looked at the entertainment acts scheduled for Sunday in Dallas? If the Super Bowl's as big of cultural indicator as everyone said in the aftermath of the wardrobe malfunction, then let's be honest--all indications from the Super Bowl's entertainment are that our culture kind of sucks. 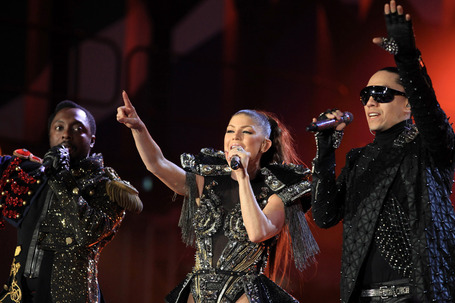 This year's halftime show will feature the Black Eyed Peas, a sanitized combination of the worst parts of rap and pop music. So instead of Janet Jackson's breast, we get day-glo visions of a creative dystopia. Or, in less ornate terms, we get the answer to the question nobody ever asked: "What would it look like if a band covered themselves in glow sticks and strange leather outfits and repeated the same stupid lyrics over and over again?"

This isn't about picking on one terrible band (not completely), but they're sort of the perfect embodiment of what's so frustrating about the direction the NFL's gone in since 2004. The same way the Black Eyed Peas pander to the most basic, neutered tastes in pop music, the NFL would prefer to promote its "brand" with mass-produced, sanitized pop from today, or washed-up acts from yesterday (like Paul McCartney and The Who).

It's less a corporate conspiracy than a conscious decision to make the entertainment as uninteresting as possible. And I guess that's okay? It's still just a halftime show that most of us will ignore.

But if the Super Bowl's really the American institution the NFL says it is, then seven years later, it's a little depressing to see where Janet Jackson's boob has gotten us. The pendulum has swung in the other direction now, and it's left us with the Black Eyed Peas playing on the biggest stage America has to offer, at the biggest event of the year. If that's not who we want, then it's at least who the NFL thinks we want.

Oh, and before they take the stage? At long last, the NFL will pay tribute to Ronald Reagan. And somewhere, seven years later, the writer who said that Janet Jackson's boob would embolden Osama Bin Laden is definitely beaming with pride over America's game. How 'bout you?