Share All sharing options for: Bart Starr Accepts FedEx Ground Player Of The Year For Aaron Rodgers At 2011 Super Bowl

Rodgers obviously has some more important business going on right now so he accepted the award via video conference saying he was honored to receive the award.

Accepting the award for him in person was former Packers great Bart Starr.

Starr said he's met Rodgers on a number of occasions and he's the real deal -- "a real genuine person", he said. Starr says he's still a season ticket holder but doesn't have much of a formal role in the organization right now.

Phil Simms, who presented the award, suggested Rodgers performance against the Atlanta Falcons in the divisional round of the playoffs was the best postseason game he's ever seen. Rodgers completed 31-of-36 passes for 366 yards and three touchdowns. Simms should know something about playing well in big games considering he completed 22-of-25 passes in his Super Bowl appearance.

Here's a shot of the award Rodgers is bringing home: 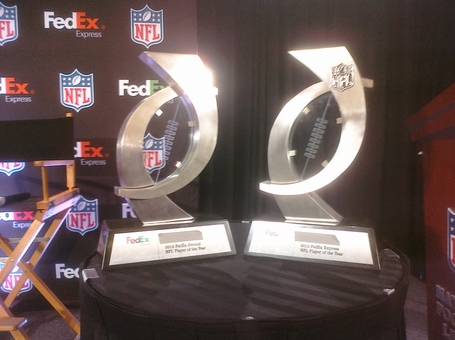