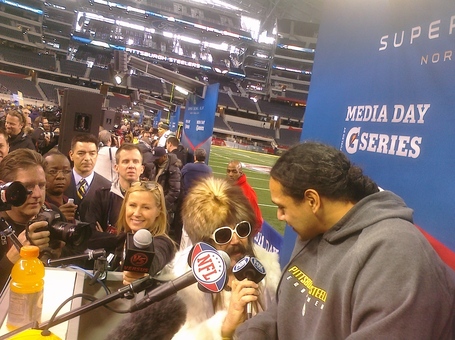 Is Troy Polamalu the greatest safety ever?

That was the question he was asked on Wednesday when the Pittsburgh Steelers met with the media before the 2011 Super Bowl against the Green Bay Packers.

Polamalu was asked about comments from his defensive backs coach, Ray Horton, who suggested he was the greatest safety every to play the game.

"I definitely don't agree with it, but I respect Coach Horton's opinions. He's been around the game a lot and he's won a Super Bowl as a coach and as a player. He's had so much to do with the success that we've had as a secondary - my own, personally, as well as the guy on the other side of the ball who's coaching the safeties for the Green Bay Packers [Darren Perry]. He was here my rookie and second year and had so much to do with helping me understand the game."

My first reaction would be say, 'Are you kidding? Of course he's not the greatest ever.' That's my reaction to most of these "greatest ever" questions when we're talking about active players.

But looking at Polamalu's career...the beginning of that argument is definitely there, especially if he takes home his third Super Bowl. There aren't many players in the game today or, frankly, in history that have the kind of impact he does. The Steelers are one of the best defenses of this generation and they simply are not the same unit without Polamalu.

Greatest ever? Maybe not yet but the seeds have been planted.