Ben Roethlisberger can cement his legacy as a Steelers legend with a win in Super Bowl XLV on Sunday. And according to most Steelers, he's changed since facing sexual assault accusations last spring. But does that change anything?

In less than 72 hours, the Pittsburgh Steelers will face off against the Green Bay Packers in Super Bowl XLV. And less than a year after surviving a criminal investigation that threatened his career, Ben Roethlisberger will take center stage, chasing history in front of more than 100 million Americans.

It's Roethlisberger's third Super Bowl, and if he wins, he'll join some pretty elite company. Former Steeler Terry Bradshaw, New England's Tom Brady, Dallas' Troy Aikman, and San Francisco's Joe Montana are the only other quarterbacks in the history of the NFL to have at least three Super Bowl rings.

Bradshaw won four with Big Ben's Steelers, and a few months ago, he said of Roethlisberger, "Going to bars — treating women like that; oh my God ... There is no excuse for that."

Today, though, Bradshaw and Big Ben have buried the hatchet. "We're Steelers, we’re part of that family," Bradshaw said this week. "And I encouraged him that yesterday is yesterday and that I have his back and I support him 100 percent." And it's a familiar, comforting theme that's taken shape over the course of this week's extravaganza in North Texas.

Big Ben's not perfect, say the stories out of Dallas, but talk to the guys that know him, and they'll tell you he's worked hard to change. And if he wins on Sunday, it'll be impossible to deny his legacy as one of the greatest signal callers in the history of the NFL... This is not one of those stories.

It may seem unfair to bring up rape allegations that surfaced 10 months ago and ultimately went unproven, but it's also something that hasn't been done nearly enough this week. Instead we've gotten tales of redemption, the stories of Pittsburgh's perseverance, TMZ videos of Roethlisberger partying in Dallas, and debates about his legacy. And if we're talking about what this weekend's game means to his legacy, it's important to remember who we're talking about.

Asked about some of the criticism he took from Bradshaw before they finally reconciled, Roethlisberger said, "I think Terry spoke a little too soon, before he knew all the facts." So, let's look at the facts.

"His bodyguard came and took my arm and said come with me," reads the police statement from the 20-year-old girl that claimed Ben Roethlisberger raped her 10 months ago. "He escorted me into a side door/hallway and sat me on a stool. He left and Ben came back with his penis out of his pants. I told him it wasn't okay, no, we didn't need to do this and I proceeded to get up and try to leave. I went to the first door I saw, which happened to be a bathroom. He followed me into the bathroom and shut the door behind him. I still said no, this is not okay, and then he had sex with me. He said it was okay. He then left without saying anything. ... I left Capital and went to the first police car I saw."

This is one of the police officers she found, according to Sports Illustrated:

Sgt. Jerry Blash, the Milledgeville police officer who wrote the criminal report, has resigned from the department in the midst of an investigation into comments he made to Barravecchio that night. According to Barravecchio, Blash described Roethlisberger's accuser as "this drunken bitch" and said, "This pisses me off, that women can do this." Sources say Blash—who had posed for photos with Roethlisberger and several other Milledgeville cops earlier in the evening—was dismissive about the sexual-assault claim when the accuser and her friends approached him that night. ... Milledgeville police failed to secure the crime scene, and Roethlisberger was never interviewed in any formal fashion that night or in the ensuing days.

So Roethlisberger left on his own while the alleged victim went to the hospital for a rape kit. Video from the club that night later disappeared, and though doctors found male DNA on the girl in question, investigators eventually withdrew their request for a Roethlisberger DNA sample.

In the end, Roethlisberger's accuser elected not to continue with the case, as her lawyer explained, "...a criminal trial would be a very intrusive personal experience for a complainant in this situation, given the extraordinary media attention that would be inevitable. The media coverage to date, and the efforts of the media to access our client, have been unnerving, to say the least." 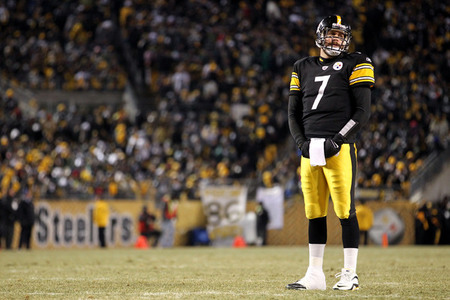 Mind you, there's no monopoly on morality here, and at this point, nobody can thwart the sand-through-your-hands impossibility of judging an interaction that none of us witnessed. You can feel however you want about Ben Roethlisberger's role in everything.

Personally, I've learned that it's pretty hopeless to try and judge how professional athletes or anyone else treats women. I mean, I'm listening to song where Lil Wayne just rapped, "Flyer than everyone and ya damn family, now girl shake that booty meat and I'm a make a sandwich." But I also know there's a big difference between sexual harassment and sexual assault.

The latter is harder to prove, with lingering psychological effects that make it much more serious, and seriously uncomfortable to consider. All those points become amplified when you add fame and money to the equation. Maybe that's why the media tends to tread so lightly with these sorts of accusations. Maybe it's why the public tends to be skeptical when women accuse superstars of sexual assault. Because, maybe, we just don't want to think about it. It's about as disturbing and unfair as life gets. We don't want to think about the ugliness that some poor girl might think about for the rest of her life.

But this week, if we're thinking about Ben Roethlisberger, it's not enough to think of him as the guy who transformed himself from what Sports Illustrated called the ultimate expression of athlete entitlement run amok. His teammates claim he's no longer the guy that gave the middle finger to media, made fun of pregnant waitresses, and refused to pay bar tabs. Fine. But he's still the guy that allegedly raped a 20-year-old girl in a bathroom, and also faced accusations from another woman, who claimed he raped her in his hotel room.

And if Ben did it and went unpunished, then he'd be the most famous example, but definitely not the only one. For every rape accusation that gets brought to police, the U.S. Justice Department estimates that about 75% of the crimes go unreported. And why shouldn't they? Look at Big Ben. In a case of he-said-she-said, it's hard to prosecute anyone. Behind closed bathroom doors, or in the privacy of a hotel room, how can it be anything other than a case of he-said-she-said?

In any event, it's all out in the open this weekend. Every woman that's ever thought twice about filing a complaint will have the clearest reminder yet of how it can be so fruitless. Not because Ben Roethlisberger committed a crime in Georgia, but because he might have. And we'll never know. Because he might have done it in Lake Tahoe, too. Because a third woman never came forward after he invited her to his bedroom and allegedly forced his hand up her skirt. Because we can't prove any of it, the maddening elusiveness of justice in sexual assault cases will be laid bare for 100 million Americans that tune in to the Super Bowl. Or, maybe not.

More likely, it'll play out like it has so far this year. Instead of hearing about what Roethlisberger was accused of, we'll hear about his offseason maturation, and his perseverance through all the adversity. Speaking of which, announcers will say, let's talk about his perseverance in the pocket and how fearless he is in the face of pass rushers. Ya know, it's not always pretty, but you can't take that away from him. All the guy does is win football games.

When is a football game more than a football game? When we attach a more profound meaning to it. When that game says something broader. And this weekend, we have the Super Bowl, the game with more symbolic meaning and broader significance than any in American sports.

A few months ago, I wrote about Michael Vick's redemption, and said that his success taught us that "in this country, you can make a mistake, and there's infrastructure in place that can help you survive. ... And in a world where everybody makes mistakes, where we all carry skewed perspectives that lead us to dark places, that's a very good thing." But that came after Vick paid dearly for his sins. He served more time in prison than sentencing guidelines called for, he lost tens of millions of dollars, he was suspended by the NFL, and he endured the most spectacular public humiliation of any athlete in my lifetime.

Watching him succeed after all that was profound, because it spoke to the strength of the human spirit, and the fairness of the American system. Justice punished him, and then, justice ensured he had a second chance. Watching him eviscerate defenses this year was beautiful for more than just its aesthetic brilliance.

Ben Roethlisberger was never convicted of a crime the way Vick was. Maybe he did it, maybe he didn't. But watching him succeed just reminds us that we'll never know.

The system worked with Vick, but the system isn't perfect. Or, at least, Roethlisberger makes me wonder. About the erased video tapes, the star struck cops that laughed off the accusations, the DNA test that never came, and the rape investigation that, listening to media this week, never happened. It's become an "offseason incident" and an "important wake-up call" and at practice Thursday, Sports Illustrated's Peter King notes, "Roethlisberger was scalding hot. He looked terrific."

So there you have it. Big Ben looks great, and with Roethlisberger under center, the Steelers have a great shot at winning on Sunday. So... Well, when is a football game more than a football game?

When Ben Roethlisberger's playing 10 months after a sexual assault investigation that was never resolved, and almost never gets brought up in detail by an image-conscious media that's afraid of the man at the center of it all, and the uncomfortable questions his success poses.

When a win means downplaying an ugly past in favor of a better narrative for the future. When a winner's legacy makes us wonder whether, sometimes, life doesn't punish the ones that deserve it.