2011 Super Bowl week has been highlighted by the weather conditions surrounding Dallas. My arrival on Monday was delayed significant because of the snowstorms hitting Dallas but things started to brighten up over the next couple of days as the snow began to melt.

On Friday, we were greeted with this in the morning: 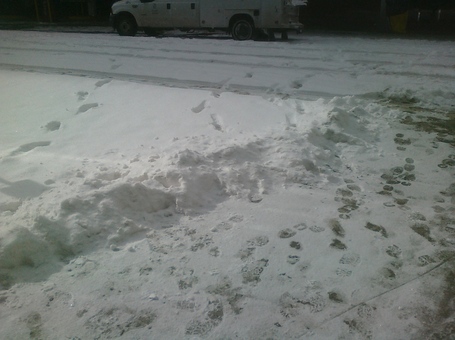 Another snowfall on top of the ice that was starting to melt. The weather, to this point, has just been a nuisance. Now, though, it's become dangerous. According to the Dallas Morning News, seven people were injured -- one of them critically -- after the melting snow and ice on top of Cowboys Stadium slid off the roof and onto the plazas surrounding the stadium.

The weather, and Dallas' response to it, has obviously been a popular topic of conversation. NFL Commissioner Roger Goodell said at a Friday press conference that Dallas has done a good job reacting to the weather considering the circumstances. The reaction in Dallas, in my opinion, hasn't been very good. Days after the first snowstorm this week ice was still all over the streets and it's hard to tell if they've even been treated (although we've been told they have).

At a minimum, keep the street right outside the media center clean so we're not complaining about it.