2011 Super Bowl Weather May Be A Problem On Sunday, Too

Share All sharing options for: 2011 Super Bowl Weather May Be A Problem On Sunday, Too

The weather in Dallas has been a big topic of conversation throughout 2011 Super Bowl week because of the many problems it's caused. I barely got into Dallas on Monday because of that weather and awoke on Tuesday mornin to find the streets coated in ice. The ice stayed there for a couple of days and, on Thursday, it started to melt away....only to see it return the following day with a couple more inches of snow.

This was the sight on Friday morning right outside the media center: 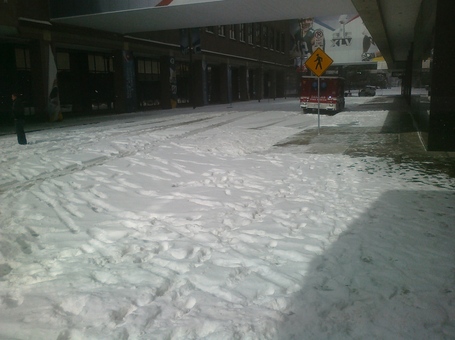 It's going to hit 41 degrees on Saturday, according to the National Weather Service, and you can already see some of that ice melting. The roads are starting to clear as of Saturday morning.

But how long will it last? Apparently, not long. Here's the weather forecast for Sunday:

We talked to one family that arrived in Dallas on Saturday morning. Their flight had been delayed and they were considering packing up the car and making the drive from Pittsburgh. That's about a 20-hour drive so you can know Steelers fans are dedicated. Plus, they had already spent a whopping $7,200 on Super Bowl tickets for the family.