About an hour before I read that report, I saw this guy making the rounds at 2011 Super Bowl week: 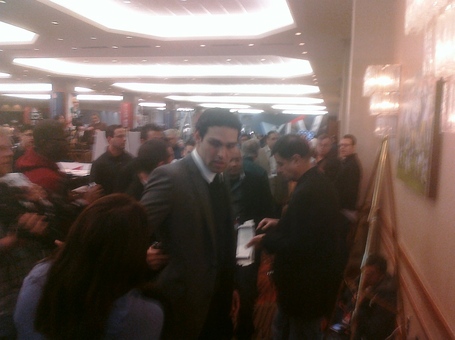 (I apologize for the poor quality of the photo but I was nearly trampled by about a dozen women trying to get a closer look at Sanchez. I had no chance against those women.)

Sanchez certainly didn't act like anything was wrong while he was milling around Radio Row shaking hands and kissing babies. Of course, he hasn't done anything necessarily wrong either. Or broken any laws, or league or team policies.

Sanchez had a big crowd of fans following him -- but he had nothing on The Situation.