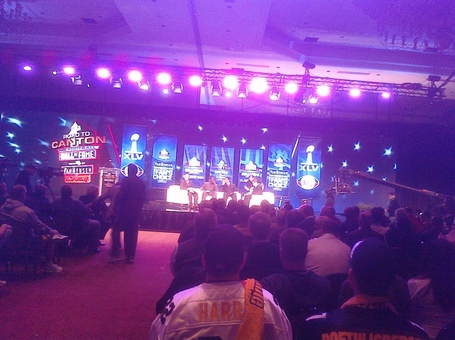 The photo above comes from my seat at the live NFL Network broadcast of the Hall of Fame announcement at the Sheraton Hotel in Dallas, Texas.

We started the day with 15 modern era finalists for the 2011 Pro Football Hall of Fame and on the live NFL Network broadcast they announced the first round of cuts.

This is not the final list as that list will be cut down to the final five.

The most interesting note of that group, to me, is that Reed came out ahead of Brown and Carter among the receivers. Receiver is the third least represented position in the Hall of Fame.