No Super Bowl is complete without the commercials presumably targeted to your houseplants, i.e. The Bud Light/Doritos/PepsiMax Holy Trinity of Subhuman Advertising. Super Bowl 2011 has its fair share, and is thus complete, but that's no reason to be happy because these commercials should make you weep, especially because Bud Light commercials now seem witty compared to their competition.

For instance, Bud Light commercials--like the one depicting a home improvement project made better by just adding a bucket of Bud Light, or the obvious product placement one--depend on you assuming people are alcoholics. This is fine: alcoholics are social, and easily pleased. Women are put upon in Bud Light ads, but not assaulted or harmed. Pets are side gags. 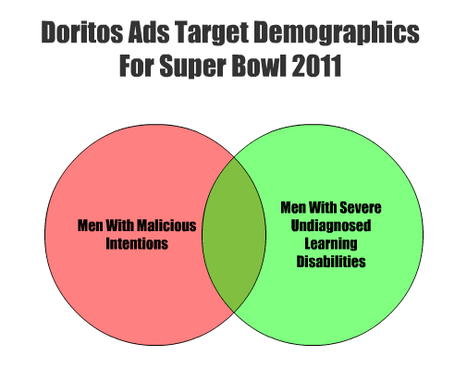 Men in Doritos ads seek to harm because they are both evil and mentally handicapped. Women stand by horrified; pets are not harmed, but that is not due to a lack of trying. Gluttony is assumed. It's a bit darker and dumber over here in Doritoland.

Finally, the lowest of the low--and that is quite an accomplishment in this peer group--are the Pepsi Max ads, where gluttonous, cruel, and subintelligent cretins slap each other like apes given powerful and unpleasant hallucinogens. People are harmed, pets aren't even around because these people have long since killed them due to neglect and/or confusing them with food.

HAHAHAH DOMESTIC ABUSE. Remember when Winston Churchill said that "It has been said that democracy is the worst form of government except all the others that have been tried." This is why he said that. Yes, Winston Churchill knew how bad these ads were without the use of a time machine. You'd be amazed what powers being drunk on hatin' Nazis and Pol Roger champagne can give a man.