New York Yankees third baseman Alex Rodriguez lost his manhood smack-dab in the middle of the first quarter of the Super Bowl. As they typically do on the broadcast, FOX cameras panned to the crowd, showing an array of celebrities taking in the game. When the camera hit Rodriguez his girlfriend, Cameron Diaz, just happened to be feeding him popcorn.

Women everywhere cooed all at once while guys across America pointed and laughed as A-Rod lost all masculinity in an instant. Check out the photo of A-Rod caught in an embarrassing spot mid-snack during the first quarter of the game (via Jose3030). 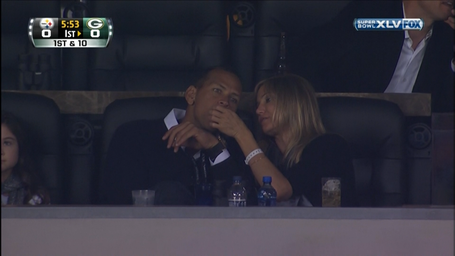 And that, ladies and gentlemen, is our moment of the Super Bowl so far. Nothing like two love bird sharing a snack on national TV.