Home Advantage In Sports: A Scientific Study Of How Much It Affects Winning

Share All sharing options for: Home Advantage In Sports: A Scientific Study Of How Much It Affects Winning

Two Saturdays ago, the Seattle Seahawks became the first team with a 7-9 record to appear in an NFL postseason game. Thanks to the league's method of determining home-field advantage, the Seahawks hosted the New Orleans Saints in Seattle.

Thanks in part to Marshawn Lynch breaking off a Nathan Arizona-style run, the Seahawks engineered a massive upset of the defending Super Bowl champions. They surely also benefited, though, from the raucous Qwest Field crowd. The next week, the Seahawks traveled to Chicago, where they lost to the Bears and were thoroughly out-played through most of the game. The Bears were a better team than the Saints were a week prior, to be sure, but the Seahawks weren't the same team without their 12th Man and, perhaps just as importantly, their subsequent 13th Through 63,336th Individuals.

We know that home-field, -court, and -ice advantage is real. Teams win more games at home. I wondered, though, whether we over-value or under-value such an advantage, so I nerded out and crunched some numbers. 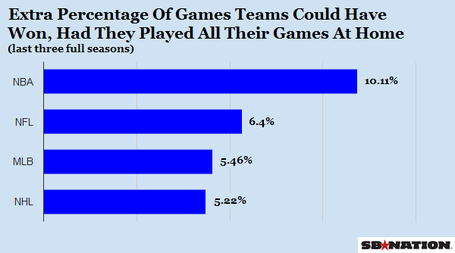 In other words, to take an example: based on the number of games an average NBA team won at home over the past three years, it projects to have won 10.11% more game if it were allowed to play all its contests at home. To extend this example: this advantage would transform a 41-win team into a 45-win team. That isn't an enormous improvement, but it might just be enough to shove a team into the playoffs.

I'll leave it for you to decide why there is a significantly greater home advantage in the NBA than in other leagues, but I do find it interesting. The NBA's environments don't vary in playing dimensions, as is the case in baseball, and weather isn't a factor. The only significant variables I can think of are the quality of the crowd, and the distance teams have to travel when they're on the road. More on those later.

Some teams, for one reason or another, enjoy a better home advantage than others. First, let's look at the NBA: 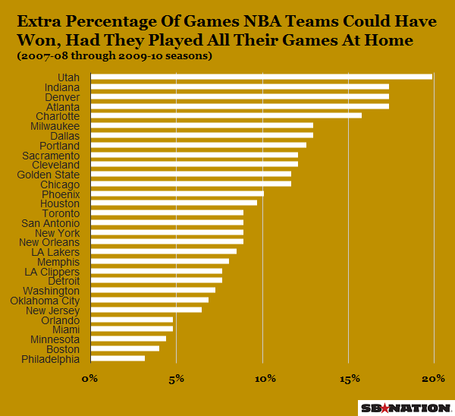 The first take-away from this is that over the past three full seasons, the Utah Jazz have held the best home advantage in American professional sports.

The Pacers, in particular, surprise me. They rank in the bottom five in attendance, but are tied for the second-best home-court advantage? Of course, these numbers reflect a team's ineptitude on the road just as much as they reflect its home success.

The Celtics, for example, actually won more on the road than they did at home. Perhaps this is because they enjoy a lot of fan support on the road, or because they're a team of seasoned veterans, or because their home crowd hurts their feelings whenever they miss a mid-range jumper. Again, I'll leave it to you to draw conclusions.

Here is how NFL teams shake out: 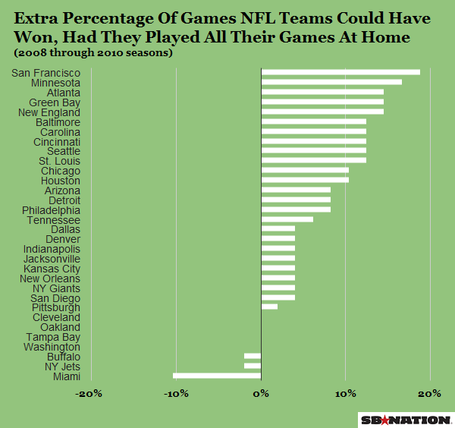 Thanks, Miami Dolphins, for making my chart look weird. Since the 2008 season, you would have been significantly better had you played all your games on the road. Think about this: according to this data, 22 percent of the league has zero home-field advantage.

As you'll see later, Miami has been no good at providing a home-field advantage to begin with. For now, here are how all 30 Major League Baseball teams stack up: 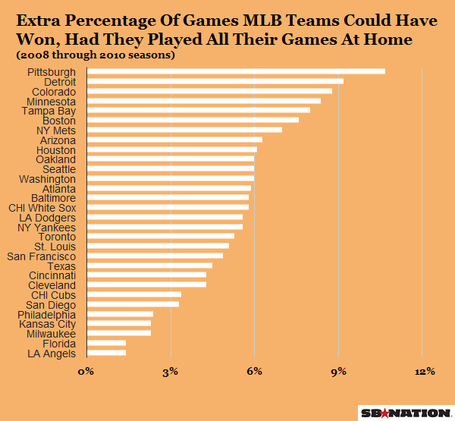 And finally, a look at the NHL: 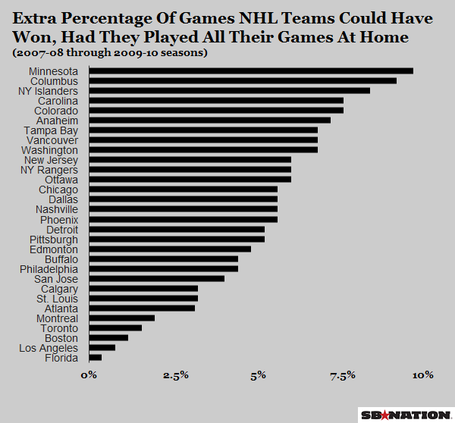 I'm trying to make some sort of excuse for the city of Miami. Maybe the state of Florida just has a terrible fan base? I don't know, Tampa Bay ranks pretty well here. Maybe it's because their playing surface is really cold and slippery? Perhaps, but then again, so are most hockey rinks. I give up.

So, finally, I re-organized all of the above data and mapped it. (Click to enlarge.) 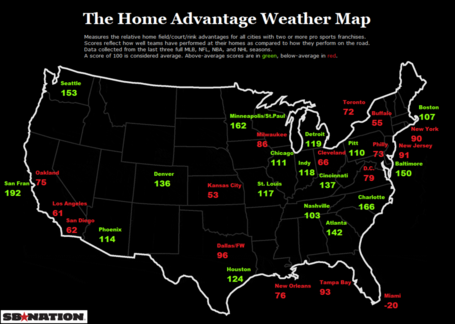 This map features every city with two or more major sports franchises. To explain the method I employed, I'll use an example: over the last three full seasons, the Atlanta Braves' home advantage was 108% of the league average, the Falcons' was 227%, the Hawks' was 172%, and the Thrashers' was 61%. The average of these four numbers is 142, and there's our score.

At 192, San Francisco (Giants, 49ers) scores the best, but I have to award Minneapolis/St. Paul as the Best Home Advantage Town, since it's home to four teams (Twins, Vikings, Timberwolves, Wild). I had to play a little with the statistical areas -- grouping Raleigh and Charlotte is a lot less controversial than grouping, say, San Francisco and Oakland.

Many of the most far-flung cities -- Seattle, Denver, Minneapolis/St. Paul, Phoenix -- score very well. A friend of mine suggested that teams with further distances to travel will naturally play better at home, and the numbers seem to bear this out.

I really didn't start out on this project with the intent of knocking the fine people of Miami, but the rankings here (4th-worst in the NBA, worst by a long shot in the NFL, tied for worst in baseball, and worst in the NHL) are pretty difficult to ignore. Of course, this data does not reflect the play of the 2010-11 Heat.

In closing: had I prepared this data sooner, the Sonics might have stayed in Seattle, and LeBron may have opted to play for the Bobcats. WHOOPS!