Share All sharing options for: Alfredo Simon Accused Of Murder In Dominican Republic

The Baltimore Orioles have had a productive offseason in rebuilding almost their entire infield, but they now have to turn their attention to off-field matters, as reliever Alfredo Simon has been accused of shooting and killing a man in Luperon, in the Dominican Republic.

An arrest warrant was issued for Simon, who is being investigated for a shooting in which one man was killed and another 17-year-old was injured. The police have him as the shooter, but Simon claims he is innocent and didn't intend to kill the victim, and on Monday he surrendered to the police and turned in his gun for ballistics examination.

Courtesy of Dionisio Soldevila, here's a picture of Simon in the station: 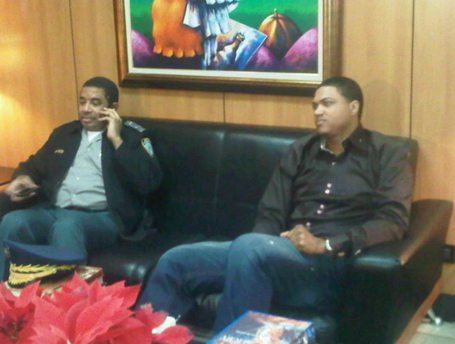 According to the local D.A., this is a case that "looks like manslaughter," and it is being requested that Simon be held in custody. If found guilty of manslaughter, Simon could face between three months and two years in prison.

The 29-year-old Simon broke through with the Orioles last season, saving 17 games while posting a 4.93 ERA. Stay tuned as this story continues to develop.