Until the early '90s, sports cards were relatively normal. When the folks at Fleer finally snapped, they snapped big-time, and the result was magical rainbow-priest Tony Gwynn, Natrone Means falling out of an airplane, and other horrors.

We all got together (well, y'all got together, I was a baby) in the early 1980s and decided that sports cards were worth money. Price guides were published, sports card investment magazines were printed, water-damaged fold-out tables were dragged out of mall closets for sports card exhibits, and so began a decade or so of neurotic obsession:

Is this an error card? Is this an uncorrected error card? Is this card in "mint" condition or merely "excellent" condition? Is this a player's true rookie card? Will this player's trade to a large-market team drive up the value of his cards? Are these card protectors acidic? WILL THEY RUIN MY COLLECTION?!? Is the sports card expo at this mall or the one out by the expressway? Are they going to stick me with the wobbly fold-out table that makes my meticulate "ASTROS OF THE 1980s" card display fall over whenever some kids leans on the corner? WHAT DOES "COLLECTIBILITY" MEAN?!?!

None of that sounds any fun at all, which of course was the original purpose of sports cards. You can only take so much of that before one day you start printing cards that assembled together into giant murals of athletes marooned in a terrifying dreamscape of...well, it's... whatever, I'm not even going to try. 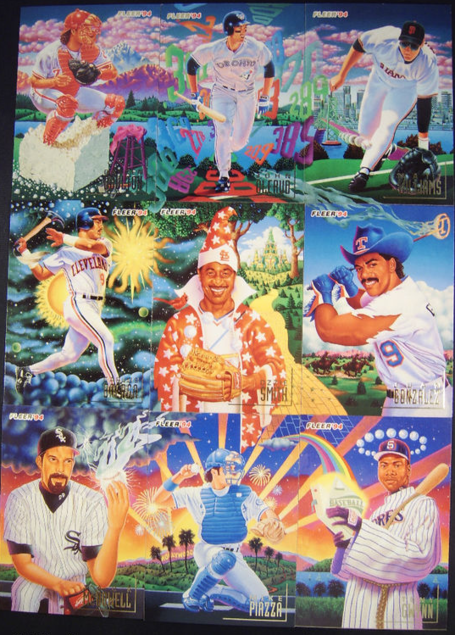 I feel like Fleer sat down to its desk one day and decided to do something "fun" that would give their cards "a bit of an edge." Pen took to paper, and the floodgates of joy and creativity were opened for the first time in 10 years. What was originally going to be a silly drawing of, like, a pitcher's fastball being on fire or something, quickly expanded into a sprawling da Vinci-meets-Dali mural of rolling green hills, and Tony Gwynn as some sort of Ambassador of the Rainbow God, and Carlos Baerga hacking away at nothing in an uncharted nebula, and Darren Daulton standing on a crumbling sugar cube next to a stool with a sheet of cloth on it.

Are you familiar with Henry Darger? In 1973, he died at age 81 after working as a custodian and living as a hermit for decades in his Chicago apartment. Upon his death, his landlords discovered in his apartment a massive work of writing that spanned exactly 15,145 pages. It was interspersed with paintings and sketches, and it was titled, The Story of the Vivian Girls, in What is Known as the Realms of the Unreal, of the Glandeco-Angelinian War Storm Caused by the Child Slave Rebellion. I feel like this is the that of sports cards.

I'm getting ahead of myself, though. These cards belong to a series of Fleer insert sets called "Pro-Visions." It was a radical card set, complete with a radical name that was a play on a radical word:

1
a : the act or process of providing
b : the fact or state of being prepared beforehand
c : a measure taken beforehand to deal with a need or contingency : preparation

Anyway. Fleer ran these for a few years in their baseball, football, and basketball sets. Some of them were very strange. I doubt we'll ever find any actual answers for these cards, so I've made up some fictitious artist's commentary for our benefit. 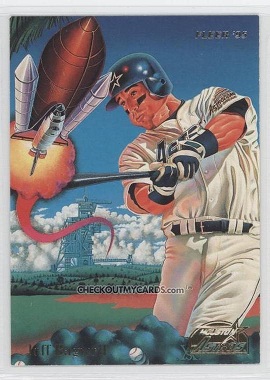 Space shuttles are generally designed to rocket directly upward until after it passes the upper reaches of Earth's stratosphere. Unfortunately, in what today is known as The Wrongest Space Shuttle Launch Ever, the shuttle instead flew overhead like an airplane. And it was upside-down. And it somehow flew directly through the bat of Jeff Bagwell, who was making a plate appearance in left field for some reason. 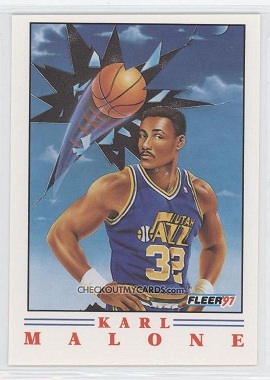 What is Karl Malone even doing? I don't think he's even supposed to be in this card. I think it's supposed to be "basketball smashes glass despite clearly not having hit the glass yet: the basketball card."

Artist's commentary: I figured that everyone would be so like "whoa, black guy in Utah" that they would not notice how terrible I am. I sure was. 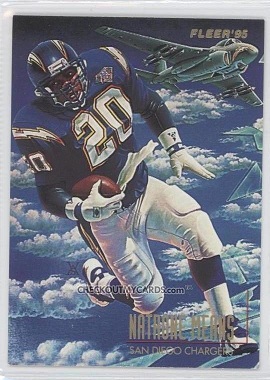 In the 1990s, running back Natrone Means jumped out of an airplane with 5,215 career rushing yards and was never seen again. More like RB Cooper, am I right? No, I'm... I'm not right.

Artist's commentary: I decided to paint the dream I have every night, which is the dream that Natrone Means is falling. In my dreams I am unable to see myself as anyone other than Natrone Means. Also, in my dreams, water comes out of turntables and faucets play Paul Simon. 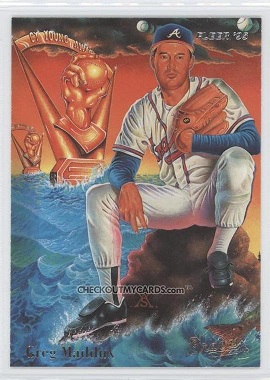 Greg Maddux was basically "if the manager of a Radio Shack were also one of the greatest pitchers of all time." If you ranked the 500 most dominant athletes in American history, Maddux would be in the top 50 somewhere, and he would be more of a mellow dork than nearly all of them put together. I seriously think that he would really enjoy the idea of living his entire life sitting on the rock in the middle of an ocean and just looking at shit.

Artist's commentary: I drew Greg Maddux's glove so large because that's how he got so many guys out. He threw the ball and then just propped up his glove like a net in a driving range and caught all the baseballs. That's sort of cheap! I have never watched a baseball game. 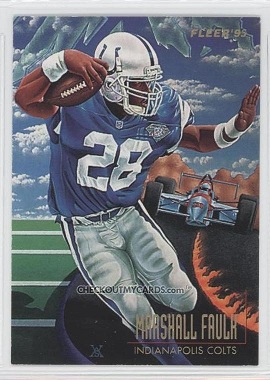 I get that this is part of a mural and above this card, Junior Seau is probably diving through a closed window or something, but for real, why are you so insistent on drawing glass in the sky? And what's up with that actual, literal line of fire? Two of them mean "radical Back to the Future stuff!" One of them means "dangerous oil leak!" One of them in front of a car, rather than behind it, means "I do not understand cars!"

Artist's commentary: Look. I'm sorry. I try to go with something city-themed for these cards. I'd like to see you try painting something Indianapolis-themed. It was either this or Marshall Faulk eating at O'Charley's.

There is so much stupid in this card set that I couldn't fit it all in one feature without writing 300,000 words. Stay tuned for more Fleer Pro-Visions silliness in a future installment of Sports Cards For Insane People.