"Good news, pitchers for the New York Mets! Next season you're going to start allowing more home runs!" This is how the Citi Field adjustments will not be sold.

It's been talked about for a long time, where by "long time" I mean "at least several weeks," but on Monday, the New York Mets have made it official: Citi Field will have some brand new dimensions next season, and all seasons henceforth.

A few limited details from the AP:

The fences are coming in at Citi Field next year.

The Mets announced Monday they are moving the walls in by as much as 12 feet next season, lowering the height to 8 feet and changing the color to blue.

Citi Field: where the fences are blue, and the hitters are not as much anymore. 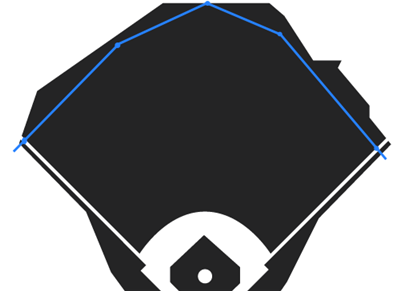 That isn't exactly what the new layout will look like, but it's close, and it's a marked change from the way things have been - especially in right field, where the wall used to be so crooked and sharp an oblivious outfielder could impale himself on it.

Why are these changes being made? They're being made in an effort to make the ballpark play more neutral. Citi has been pitcher-friendly since it opened, and the Mets want to even the playing field. Interestingly, there were concerns about how Citi would play before it even hosted its first game. From our own Amazin' Avenue in January 2009, we get the following blockquote out of that year's Hardball Times Annual:

Citi Field, the new ballpark for the New York Mets, is poised to become MLB's new Grand Canyon. City Field is a vast, cool weather, sea-level stadium, and those factors will have a hugely negative impact on home runs.

Also interestingly, here's how Mets hitters have performed since 2009:

And here's how Mets pitchers have performed since 2009:

What that suggests is that Citi has actually helped the Mets more than it's hurt them. They've gone 122-121 (.502) at home, and 104-139 (.428) on the road, since moving from Shea. But what matters here isn't so much what's already happened as what's likely to happen. The Mets have better information than I can pull from Baseball-Reference, and these adjustments should make the park more neutral for everybody. That might bother some pitchers, but the changes will be welcomed by hitters, and they'll also make the Mets a more appealing potential destination for free agent position players.

I guess one could also take the cynical approach and say the Mets are bringing in the fences to artificially boost their numbers in the post-Jose Reyes era. "See, the lineup didn't suffer at all!" That would be very Mets.

Years ago, the Detroit Tigers brought in the fences at Comerica Park to make things more even. The Royals also moved back the fences at Kauffman Stadium for the same reason.