Do you think that small children should do a bunch of drugs? According to sets of sports cards issued by police departments, they should not. Herein, we take a look at some of the crummiest sports cards ever made.

Share All sharing options for: Sports Cards For Insane People: Police-Issued Cards, Here To Harsh The Buzz Of 8-Year-Olds

Nevermind the after-school specials, the D.A.R.E. in-school assemblies, and the Very Special Episodes of sitcoms. When I was in elementary school -- in other words, the late '80s and early '90s -- anti-drug messages were on everything.

EVERYTHING. Lunch boxes. Instruction manuals for action figures. Cereal boxes. Arcade games. My friend had a little generic plastic sword that said "I WILL SAY NO TO DRUGS" on the handle. Phrases like that were coming at kids like me so often, and in so many directions, that it was impossible for a kid like me to make an actual informed decision on the matter. Should I do drugs? I don't know, because I've never seen them and don't really even know what they are. It was some genuine "Knights Who Say Ni" business. The word "drugs" was simultaneously feared and completely meaningless. 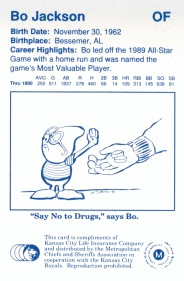 This is a back of a Bo Jackson baseball card from a set issued by the Kansas City Police Department. I was issued these cards in second grade. I was an eight-year-old square whose idea of making poor life decisions was limited to writing "piss boogers" on my desk, and I couldn't even bring myself to do that because I was too chickenshit.

"Don't do drugs, because many of them are highly addictive and will ruin your life." That's all that needed to be said, but propaganda like this lopped off the "because" part that makes it an actual argument and added "BO JACKSON SAYS" at the beginning.

By their very nature, then, these propaganda leaflets, dropped during the height of the War On Drugs, were pretty weird. And often, the execution was even weirder.

These card sets, which have been produced for decades by many police departments across the country, also served another noble purpose: to print sports cards of people who otherwise would never have been on a sports card. 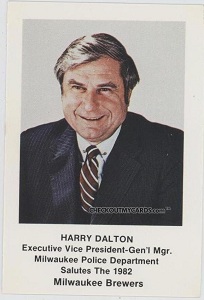 d'aw gee! i finally got m'own ball card! never thought i'd be on m'own ball card! better dress up snappy for it! nobody wants to open a pack o' ball cards an' see some kinda fleamarket joe-jack lookin' back at 'em! d'oh boy this is gonna be so great, hope all the kids out there collect m'ball cards! hoohhhhhh boy!

For experienced ballplayers, though, these cards were pretty unimportant. As in, "don't bother to put my glove on all the way" unimportant. 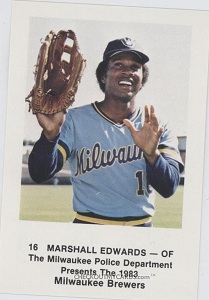 Now that I think about it, I think shoving part of your hand out of your glove was something outfielders did in the '80s. Outfielders also did drugs and steadied their gloves with their free hands when they caught the ball, though. Strange days.

It's easy to mock the slipshod quality of these cards (which, by the way, usually suffered from the Bowman Problem of not fitting in baseball card albums), but I mean... 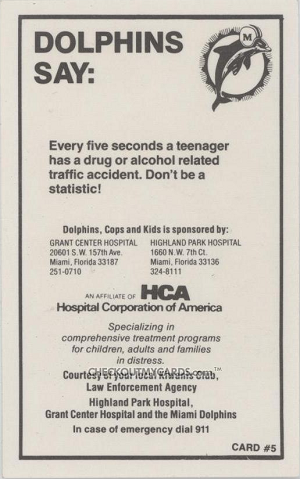 QUICK MATH: One per five seconds crunches out to about 6,300,000 per year. To compare that against some readliy available data, that surpasses the total of all traffic accidents committed in the United States in 2005, by anyone, under any circumstances. Oh my God! THESE TEENAGERS ARE DOING SO MANY DRUGS THAT THEY HAVE RUINED MATH!!!

I'm also really digging the Hospital Corporation of America advertisement, because I'm an enthusiast of advertisements of products that do not need advertisement. "Hey, kids! Do you need to go to the hospital? Try hospitals!"

Of all police card sets, though, the greatest might be those issued by the Columbus Police Department during the early '90s. The back of each card featured an anti-drug message written by a local elementary school kid. Of course, there was no reason to believe that any of these kids were any more of an authority on the hazards of drugs than you were, but what they lacked in wisdom, they made up with semi-intelligible rhyming. 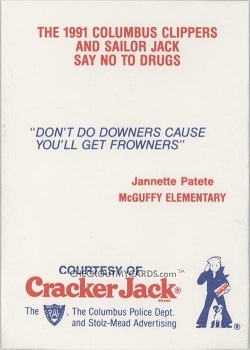 Even at the age of eight, any second-grader can sniff out a bullsquid work assignment when they see it. A special guest speaker probably made a presentation to the class and asked kids for anti-drug pitches. Maybe the guest speaker was even naive enough to try to pass out worksheets.

Jannette, who was evidently no fool, scribbled the most inane, dispensable thing she could think of and turned it in, not wasting a second more than she needed to. It was enough to make the cut, because she was probably competing against 20 kids who didn't turn anything in and seven who crudely drew Master Shredder punching a giant oil drum labeled DRUG'S [sic]. 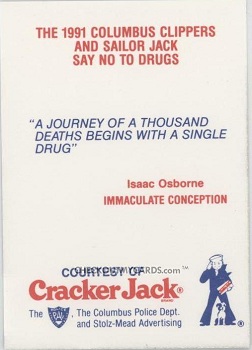 What the Hell? Who is this kid? What kind of kid says something like that? DO NOT QUENCH THY THIRST FROM THE WELL OF NARCOTICS LEST THE DÆMONS OF THE SEVENTH HOUSE CONDEMN THY SOUL TO ETERNAL FLAME, THUS SAYETH THE FORBIDDEN BOOK OF NIDHOGG 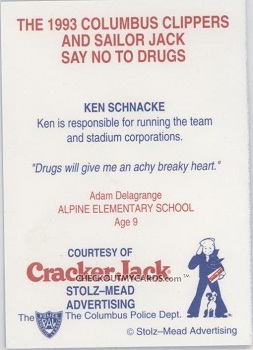 There's just something unbelievably depressing about the juxtaposition of a kid's foretelling of his troubled future with his determination to make a perishable cultural reference. Way to steal the show with your depressing story, Adam. This was supposed to be Ken Schnacke's moment in the sun, and some doomed nine-year-old is taking up space that should have been filled by his minor league general managing statistics. 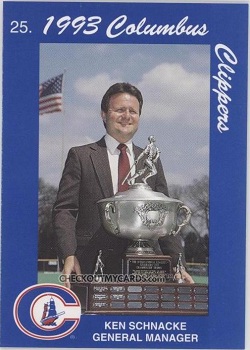 Well, at least our man got himself on the front of the card. How can any minor league accomplishment warrant a trophy that large? Even if you win the International League championship, all you get is a pen flashlight that says PURCHASE MINOR LEAGUE BRAND PRODUCTS on the side. He must have saved the minor leagues from Y2K or something. 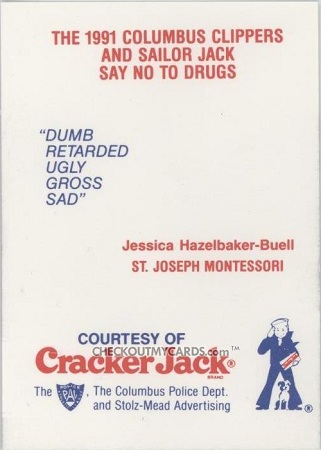 That's not a nice word, but I suppose printing an ableist slur is okay as long as it's in the service of having some poor kid pencil-barf a rabble of words onto a sheet of paper in a vain attempt to convince you that she actually understands and cares about the half-sentence mantras you keep yelling at her.

As an adult, I do not use drugs. For this I am tempted to credit strong parental role models, a healthy self-esteem, little to no exposure to drugs in my youth, and a desire to create a future for myself. It's more likely, though, that sports cards like these are what kept me on the right path.

I'll leave you, then, with this important message. 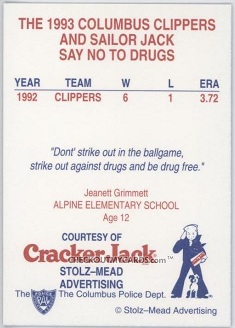 Indeed. Wait, what? All this is burning me out. I'm gonna go do some drugs. Like three feet of drugs. What's the unit of measurement for drugs? Kelvin? I'm going to do like 100 Kelvin of drugs.