Who Will Be 2012's Marques Colston or Donald Driver?

Share All sharing options for: Who Will Be 2012's Marques Colston or Donald Driver?

If your favorite team needs a wide receiver, chances are that guys like Alshon Jeffery, Justin Blackmon and Michael Floyd are already on your radar - all three project to be top 15 picks in next April's NFL Draft. If your team looks like it's headed for the playoffs, the second tier of WR's might interest you: Mohamed Sanu, Nick Toon, Ryan Broyles, Jeff Fuller, etc. While those guys will get the bulk of the media coverage and hype in the early spring, there are a number of later prospects who could turn into quality football players. While it's very rare for a team to hit on a late round WR, guys like Donald Driver, T.J. Houshmandzadeh, Steve Johnson and Marques Colston are proof that great receivers can be found in the later rounds of the draft. Let's take a look at some of the best late round WR's of the past 16 years, as well as some 2012 prospects could become the next late round steal

How rare is finding a quality WR in the late rounds of the draft? Very rare indeed. Take a look at the numbers: 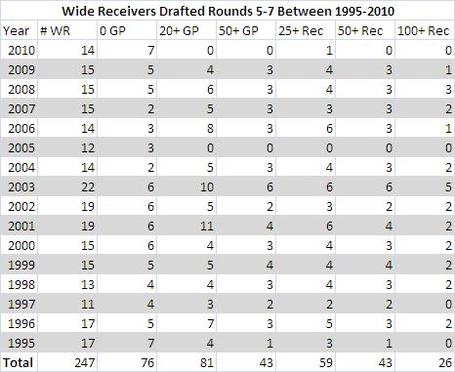 Here are the best rookie seasons for late round receivers in the same time period:

Not particularly impressive. GIbson had a great run with the Rams in 2009 (After being traded by the Eagles a month and a half into his rookie season). Colston stands far above the others, responsible for nearly 19% of all the Saints completions in 2006. Only 6 late round receivers since 1995 have accounted for 10%+ of his team's catches in his rookie year (In the current pass-happy NFL that would about 32 catches based on 2010 team averages).

Overall, here are the most productive top late round receivers since 1995: 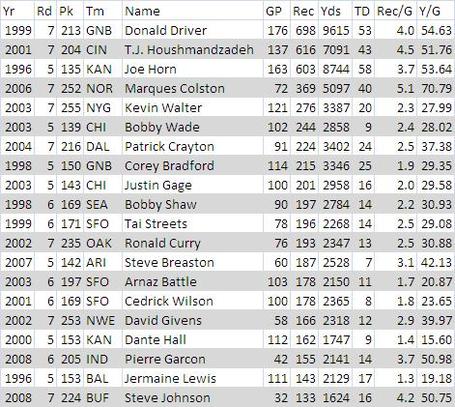 There aren't a lot of big names outside of the top guys. Pierre Garcon, Steve Breaston and Steve Johnson should all continue to climb this list - though displacing the top 3 guys will be quite a task.

So, who are the 2012 WR's who are most likely to find their way onto these lists a year or two from now? Here are 5 possible late round WR's worth considering:

1. Chris Owusu (Stanford) - He hasn't put up big numbers, despite playing with Andrew Luck, but Owusu is a solid mid-late round prospect. He has fairly good size/speed and his ability to help in the return game could ensure is he active on gamedays in the NFL. He comes from a pro-style offense and should have less trouble adjusting to NFL schemes than some other college receivers. He doesn't stand out in any aspect, but he is reliable chain-mover and could be a solid #2 or #3 WR in the NFL.

2. B.J. Cunningham (Michigan State) - Has the size (6'2 210) and college production which tends to attract GM's once the elite athletes are off the board. Watching him, he reminds me a bit of Carolina Panthers' 2010 3rd rounder Brandon LaFell. Cunningham has big, soft hands and his size and strength allow him to gain separation despite a lack of explosiveness. Like a lot of college WR's, his route-running is sloppy and he will need to improve that if he hopes to find a job on an NFL roster.

3. Damarlo Belcher (Indiana) - Big, productive and surprising athleticism for his size, Belcher will catch the eyes of scouts at the combine (if he's invited) or in pre-draft workouts. Unfortunately for him, he was recently kicked off the team which makes the odds of him being drafted pretty slim. Still, he creates the types of mismatches which will intrigue some NFL team into giving him a chance late or as an undrafted FA.

4. Brian Quick (Appalachian State) - Another big (6'5, 220) and highly productive receiver, Quick would be a serious consideration for the 2nd or 3rd round if he were faster. Throughout his college career, he's put up an impressive 17 yards per reception - better than any of the top 2012 WR prospects. Despite being fairly slow (the general consensus is that he will run a 4.6 40 at the combine), he has some big play ability.  A former basketball player, Quick has great leaping ability, which on top of his size could make him a quality red-zone target at the next level.A good showing at the combine and Quick might not last until the later rounds of the draft.

5. Joe Adams (Arkansas) - Adams is a speedster (sub 4.4) with great hands who should come off the board in the 5th or 6th round. He's an elusive runner after the catch and on punt returns. He could find a lot of success in the NFL on screen/short passes due to his YAC ability. He's a poor route-runner at this point, which combined with his lack of strength, will cause him to struggle to consistently gain separation from NFL DB's despite having quick feet and a good first step. He will probably need a year or two to improve his route running and add some muscle before he will be a productive NFL receiver. But his playmaking ability gives him a very high upside.

Read more of my work at http://pick256.wordpress.com/