The Greatest Sportscasting Moments Of 2011, Numbers 20 Through 16

Over the last year, dozens of people in suits talked to you for hours and hours. Here is a list, complete with audio and video, of the 25 greatest, worst, or otherwise notable sportscasting moments of 2011.

Share All sharing options for: The Greatest Sportscasting Moments Of 2011, Numbers 20 Through 16

Sportscasting is a tougher job than I'm giving it credit for, but... listen, y'all. A no-hitter isn't a pick-six or a dunk or anything else that happens without warning. It's a slow burn. An hour before a no-hitter is complete, you know it's a possibility, and if you're a sportscaster, you spend that hour coming up with the best one-liner you can.

They may have run the Kentucky Derby today, but the Tiger Horse was number one!

Welp! Sometimes the creative juices just aren't flowing, and there's nothing you can do about it. But you know, at least it ended up better than the ideas he had hastily scrawled on his scorecard. 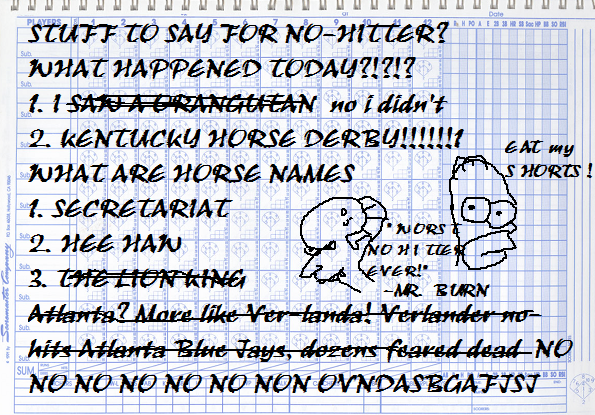 (Via @bubbaprog at SportsGrid)

Brian Dunseth: The fact that you've got batteries, bags of urine, anything flying at you, [...]

Play-by-play: Did you just say "bags of urine"?

Brian Dunseth: Unfortunately it's a part of the game, and it's something that you experience once you hit the road sometimes.

BAGS OF URINE. Be sure to listen to that clip and observe how hilariously matter-of-fact Dunseth is about it, as though he's talking about traveling on a crowded bus or any other thing you would expect him to talk about here. Anyway, this is Honduras he's talking about. Don't try that stuff in America.

Most probably would have stopped at, "I got enough to feed the needy," but this fellow went ahead and laid the next four lines on his listeners.

Have you ever opened up your laptop? Like, taken a flathead to it to pry it open and see what's inside? If you haven't, you don't know that there's a miniature canister of confetti ready to deploy out of the keyboard whenever you Google "lacrosse rap." It was a really special moment, to be honest with you. Anyway, among the top results was a post from a lacrosse forum:

Can someone give me a funny rap about Lacrosse that I can rap to my team?

There was one response:

we play lacrosse cuz we the boss the other teams gonna lose but thas their loss..

Sigh. Wasn't worth it. Confetti is fun for like three seconds, and then cleanup takes forever. Kind of hard to understand how this appeals to anyone. "POOF! Congratulations! Here is a chore!"

A half-court game-winning heave is a perfectly valid excuse to start going crazy, and there is plenty of crazy-going in this video. What makes this better than your average buzzer-beaty yelly screamy thing is that it's happening in a mostly-empty arena.

Listen to how loud he's yelling! Look at how empty the place is! Look at how many shits the people who are in attendance appear to be giving! It looks as empty and echo-y as a Holiday Inn swimming pool at five in the morning. You know that everyone in the building could hear this dude.

I actually like Jon Miller a lot, which is why it's kind of a bummer to hear him bury an award-winner's moment in the sun by talking about his own career. A partial transcript:

Dave, Jon Miller with the San Francisco Giants, formerly with ESPN Sunday Night Baseball. Not that I'm even thinking about that, as I'm here to congratulate you on this great award from the Hall of Fame, the Ford C. Frick Award. I don't want it to overshadow anything or even color my thinking about congratulating you.

Although, the Ford C. Fricke Award came my way last year, and I remember thinking, 'Well, this is probably a good career move, anyway. You get that award, and this is a big national award, and you get to make a speech up in Cooperstown and whatnot.' So I got the award and then they fired me.

[puts on party hat, brandishes noisemaker] "Hey! Hey, everyone, it's Jon Miller! Jon Miller, from the television! He sure is great! He's on the radio! Let's tune in and see what he has to say about this swell broadcaster! He sure is a smart fella, so I'm sure he'll say plenty of great ... oh ... oh, um, he's talking about some weird internal business drama that nobody ... cares about. Welp! Um, neat!" [twirls noisemaker slowly enough to hear individual clicks]

I don't know. Sportscasting is a tough art, and maybe in order to truly get comfortable with it, you have to forget that you're talking to a million people. And maybe if you do that, you're liable to start talking shop like the servers sneaking out for a smoke through the wedged-open delivery door behind the Outback Steakhouse. They took away a four-top that was supposed to be in Jon Miller's section, you guys! He's really mad, you guys. Sports radio!