I spoke with Irina Shayk, the 2011 SI Swimsuit Cover model and fan of postmodern Japanese literature, at lunch on Tuesday. We talked a lot about travel, the dangers of being a swimsuit model, and Madagascar. Then I forgot to ask her who takes longer to get ready before going out, her or her current boyfriend Cristiano Ronaldo. This is a transcript of our conversation.

SBN: How was Letterman last night?

IS: It was a lot of fun, thanks. He's great, the other girls were fun, and the whole experience including the show has been fantastic so far. It's been the greatest thing.

IS: I don't know. Everyone's been nice so far, so nothing too strange.

SBN: Let's see if we can change that.

SBN: Had you been to Hawaii before?

IS: No, and that was a really easy, relaxed place to do a shoot. It's beautiful, it's warm, and the crew and all the people working on the shoot make it a really easy atmosphere for you. You have a 3 a.m. wake-up call, and everyone's jetlagged coming from Europe, so that's crazy. But the crew and the place made everything feel like family there.It was a great experience. 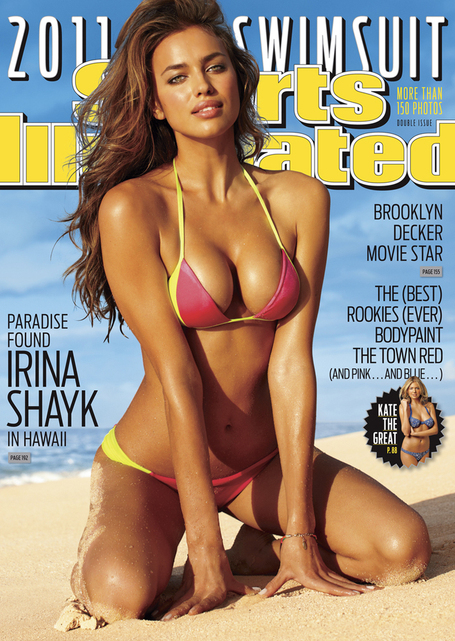 SBN: There are occupational hazards associated with modeling, right?

IS: [laughs] Well, not dangers. For SI we did a shoot in the Philippines in Kalibo. It took me 35 hours of travel to get there because I missed one flight, then another, and then missed every connection after that. When we got there you had to climb a mountain to get a beautiful shot, or you had to jump into really cold water to get a shot. It was fun, but Maui was more fun as a shoot.

SBN: So as someone who travels a lot, you have to have favorite airlines, right?

IS: Oh, sure. I love American Airlines, Lufthansa, and Iberian airlines. That's a good question, by the way.

SBN: Why thank you. What do you always take with you when you travel?

SBN: What are you reading right now?

IS: I'm reading a Russian book about powerful women of the 18th century. Russia was ruled by a woman in the 18th century, and I'm fascinated by the stories. It jumps back and forth a lot, and I like books that do that.

SBN: I read that you were a fan of the Japanese writer Haruki Murakami, right?

IS: Yes! I love him. You know what I love about his books? He's so easy to read. You get three pages in and you have to finish the whole thing.

SBN: How many languages do you speak?

IS: Sadly, I only speak Russian, and then English, and even then my English isn't very good. But I'm getting better each day.

SBN: You worked on Kanye West's video for Power, right?

IS: It was moving art.

SBN: Got it. You met Kanye while working with him, yes?

IS: I did, and he's a really great person to go with being a great artist.

IS: Yes, I have Kanye West on there, along with a lot of classical music like Beethoven and Mozart because I like to sleep on planes.  My favorite radio station in New York is 105.1, because they play a lot of hip-hop and R&B.

SBN: You travel to NYC and Paris all the time, but what's your favorite place you've been that a lot of people might be surprised to find out you've been to?

IS: Madagascar. Definitely Madagascar. When I was a student I did a report on Madagascar, and ever since then it was my biggest dream to go there. Three years ago I went, and it was so different. We live in this high tech world with Facebook, Twitter, and mobile phones, and there you land and you have nothing. Yet the people live and get by every day walking in the roads, living this super simple life, and they're still happy. It is an experience that keeps you humble, puts things in perspective.

SBN: What job would you take if you were not a model? I mean, if you had to?

IS: Well, when i was a kid I used to play like I was a schoolteacher, sitting a desk and grading imaginary papers. So I'd probably say a literature teacher.

SBN: Do you consider yourself a sports fan?

IS: I would say so, since I watch hockey, football, boxing, and tennis. The nice thing about this Sports Illustrated tour is that I finally got a TV this year, the first I've had in three years in New York.

SBN: Wait: how long did you go without a television?

IS: I'm on the road around half of the year, so I had to explain to my friends when they came to my apartment and saw that I had no internet, no television, no food in my refrigerator, "Look, I don't really live here. I live in planes." I'm enjoying it, though.