Remember that crazy second period in the Bruins vs. Canadiens game? Yeah, it wasn't over after just 40 minutes. Instead of describing all the carnage, we'll just show you.

First, the score sheet. You're gonna want to click and enlarge. 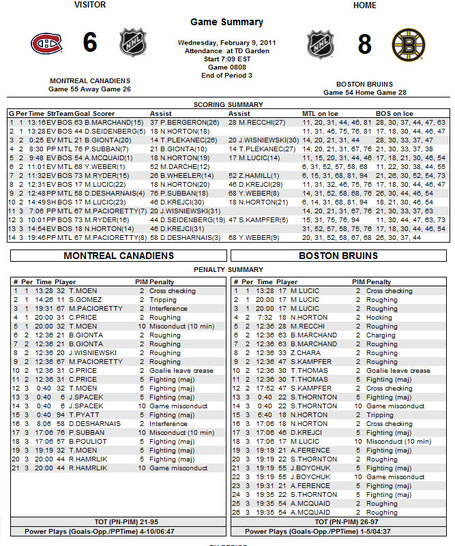 Boston finished with 97 penalty minutes. Montreal finished with 95. That's 192 total. There were a total of seven fights (including one goalie fight) and four game misconducts. Oh, 14 goals too.

Goals? So what... we'll look at the rough stuff after the jump.

Courtesty of HockeyFights.com, here's a look at the first brawl and the goalie fight between Carey Price and Tim Thomas.

Things got fun again with about two minutes left in the game. David Krejci might not be fighting any time soon after this one with Benoit Pouliot.

Then with less than a minute to go, it all flared up one more time.

Andrew Ference dropped 'em with Travis Moen, with the Bruin getting the better of that one. Shawn Thornton beat down Roman Hamrlik and Jaroslav Spacek flopped his way into the fist of Johnny Boychuk, but Taylor Pyatt certainly got the worst of it all. His face met the fist of Gregory Campbell (insert Colie joke here) a whole bunch of times and the results were not pretty. 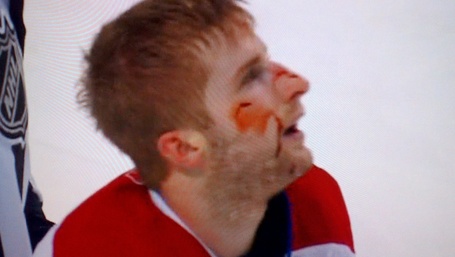 That was essentially it for the rough stuff, despite a little attempt from Adam McQuaid to get things going once more at the end. 192 penalty minutes and lots of ice in the Canadiens locker room.