In the 1990s, everyone simultaneously went completely insane. There were pogs, a booming economy, an unprecedented expansion of the prison state, a sitcom starring puppet dinosaurs that ended with everyone dying, McCarthy-esque "Gay Agenda" fear mongering, Rush Limbaugh's rise to prominence, the Internet in its unbelievably weird fetal stage, wraparound Oakleys, fanny packs, snap bracelets, Jeff Foxworthy, and Myst. Take just two or three of those things, put them in your life, and see how many hours pass before you start singing "Happy Birthday" to your coat closet while walking around your house and shoving candles in all your light bulb sockets.

We were eventually able to rein ourselves in, but not before elevating an innocent hobby for children into a weird universe of glossy finishes, shirtless men, foil embossing, and anti-counterfeit holograms. We first decided baseball cards were worth money in the early 1980s, and we somehow managed to behave until the '90s, at which point the industry completely flew off the rails.

Score's Dream Team subsets of the early '90s are prime examples of the industry's early, pre-completely-insane attempts to experiment. Score made a fearless attempt to juxtapose the wildly disparate genres of "artsy" and "fartsy," and they certainly succeeded. 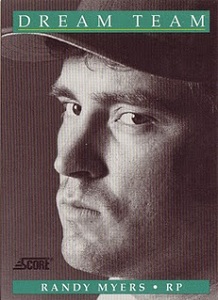 huh? oh uh hey kiddos, my name is randy and welcome to my baseball card, i uh, i  think i might have some Squeez-Its in the fridge, also might could be some graham crackers in the kitchen, go an get ya some grahams if ya hungry

On the back of the card, they finally get around to telling us which team Randy Myers actually plays for, and they also describe him as an "effervescent type of guy." So what's with the long face here? What the hell happened, y'all? "Hey, bad news, Randy. Desert Storm is over already. They didn't even get to use all the F-16s. I know, right?" [takes picture] 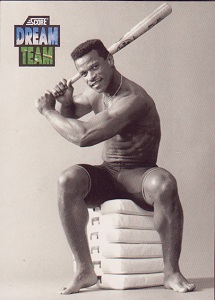 Rickey Henderson appeared shirtless in not one, but two Dream Team cards, which is perfectly fine because he is Rickey Henderson. Remember, this is the fellow who would stand buck-naked in front of a mirror and chant "Rickey's the best" prior to games. He was and will always be the greatest dude.

Consider, though, the scenario implied in this photo. He's playing in his underwear, which, whatever, because again, Rickey Henderson, but why would he want to bat while sitting down? He can't step into the pitch or use his hips, meaning his arms will have to do all the work. Nevermind that he is apparently playing a variant of six-base bizarro baseball in which stealing a base means literally stealing a base and dragging it around with him.

After this photo shoot, Rickey laundered his bases. They show up as rosin bags in bank statements. 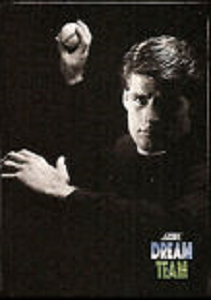 Hey, look, it's cinema's Casper Van Dien! What was it like on the set of Starship Troopers? Where is the rest of your body? Did the giant bugs eat it? OK I'm out of questions, thank you for your time.

Scott Erickson had a terrific rookie half-season in 1990 before eventually regressing into mediocrity. I was really surprised to find that he stayed in the majors until 2006. I certainly didn't notice. Who else is still in the majors who we don't know about? I bet John Jaha is DHing in the A.L. Central somewhere. 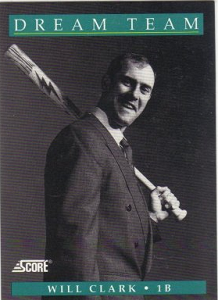 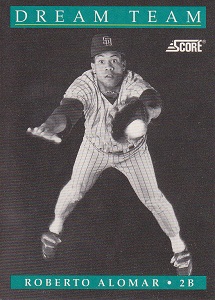 Sandy pressed his hand against the glass as his other reached for the airlock controls. "Brother," he said. His voice crackled through the intercom. "My brother, I will always remember our days on Earth. The hours I spent in your company. Those will always be my best days; certainly better than those in the New Earth to which we are heading."

Roberto began to shiver. "I wish it could have been different. Perhaps in another time, in another life, you and I will meet, and we will know and remember. May the oxygen I would have breathed be otherwise spent in the lungs of a future priest or emperor."

A moment passed. Sandy wiped his eyes with the tips of his fingers, then the back of his hand, and then slowly pulled the lever. The chamber blew open, the dull gray of the airlock door leaning away, yielding to the terrible blackness. Roberto slowly vanished from view. Sandy thought of the carnival. He was handed a balloon. He felt the string slip, and looked up. His stubby arms were not long enough to save it. The balloon wandered upward, growing ever smaller until it was swallowed by the sky. Was Roberto with him that day? He could not remember.

Oddibe McDowell placed his hand on Sandy's shoulder. "Do not worry, friend," he said. "He will find his way to Heaven." 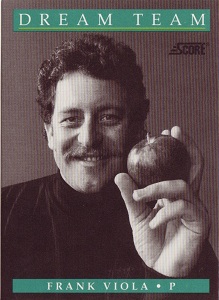 Find someone who has no idea of who Frank Viola is, sit them down, show them this image, and ask them who they are looking at. The answer will be one of the following. 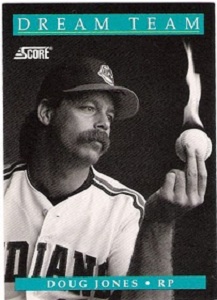 By 1993, Score toned down the artsy-ness a bit while still keeping the players in street clothes, the result being a bunch of photos that looked like headshots from the inside flap of a Tom Clancy book. Seriously, they all looked like authors of grocery-store military/espionage novels. 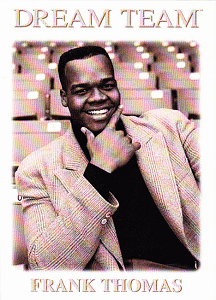 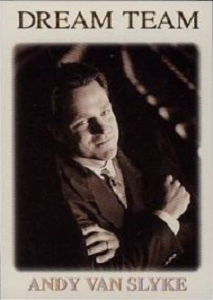 "Suddenly, a fax came. Andy took the paper out of the fax machine paper holder thing and read it. It said a bunch of technological things but Andy was smart, having gone to technology school. "This fax is about Russians and bombs," he exclaimed. 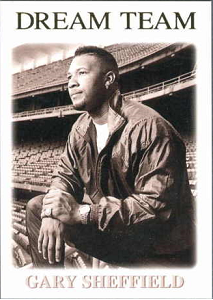 "Gary picked up the phone. 'Hello?' he inquired. A mysterious voice came from the other end. 'Hallo. I am Russian spy. Everything eez not as eet seem. P.S. I am from Russia.' The line went dead. 'I have to warn the President,' Gary exclaimed." 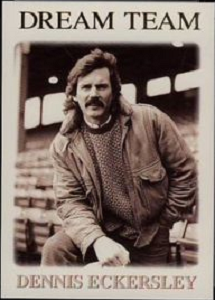 "'Are you scared of missiles?' Dennis shouted to his bureaucrat nitwit boss. 'Well, you should be, especially if they're nuclear missiles, and especially if they're stolen by terrorists.' Dennis angrily stormed out of his boss's office and slammed the door so hard that all his fancy-schmancy diplomas fell off the wall. The boss stared out the window. 'Maybe he's right,' he wistfulled. 'Maybe he's right about all the bombs, etc.' "

Score's Dream Team set wasn't nearly as crazy as some of the gimmicky sports cards that followed, but they stand apart, not only as slightly-to-very goofy portraits of baseball players, but as one of the industry's first attempts at artistic eccentricism. They were a sort of predecessor to Leaf Studio and Upper Deck's Iooss Collection, sets that managed to display some class while everyone else in the world of sports cards was tripping balls.

Putting "art" on a baseball card may have felt at the time like printing Rembrandt next to Ziggy in the newspaper, and, given that card collecting was meant as a hobby for children, perhaps it was. But at least they tried.