He Is Legend: The Astros Fan Who Ran On The Field And Got Away

On Friday night, a man ran on the field at Minute Maid Park... and temporarily escaped. In doing so, he turned our deepest ambitions into reality and forever damaged what can never again be made right.

Share All sharing options for: He Is Legend: The Astros Fan Who Ran On The Field And Got Away

There is a part of your heart and mine that rejoices in the beautiful futility of a vessel launched to a terrifyingly matter-of-fact death. It is what compelled us as children to stand tiptoed on the beach, squint our eyes in vain to spot a Europe we could not see, and try to throw a pebble to the other side anyway. We tied messages that no one would read to helium balloons, never to be seen again. We buried time capsules in the hope that a construction worker hundreds of years from now would strike his shovel across it, open it, and be interested in the results of your spelling bee.

And then we grow up, and we purchase lottery tickets, and we etch drawings of naked people on plates of gold and blast them into an indifferent frozen void. The purest and least repressed expression of this impulse is surely made when the vessels are our very persons. Such is the case when one of us storms a baseball diamond in the middle of play.

It never works. I visited this idea just days ago. You will always be caught. You will certainly spend the night in prison and pay a large fine, and the reward is the satiation of the impulse triggered deep within your soul, a soul slapped together by millions of years of an evolutionary process that never quite cared about what was best for you.

On Friday night, in the Houston Astros' Minute Maid Park, one of us took this relationship and knocked it on its side. He ran on the field and escaped, damaging a system that will never again be made right. Video documentation of this event comes from Mark Lancaster, via Joey Gelfand and J.E. Skeets.

To the blackboard, please. 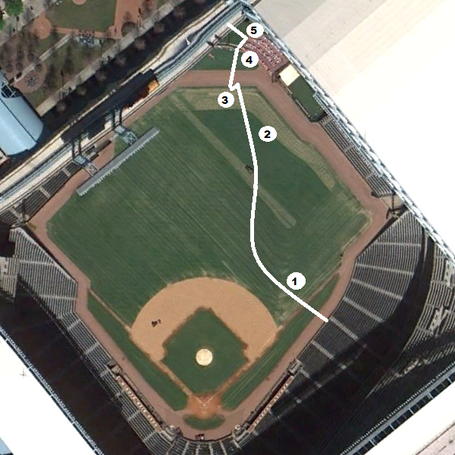 1. An alternate angle shows us that this gentleman shot straight of the seats in right-field foul territory. This, friends, is the trajectory of a wasp toward its aggressor, the single-mindedness of an antelope evading a hyena, and ultimately, the gravitational inevitability of a trout dropping into a waterfall.

2. Did the gentleman in question spot an opportunity when he saw the park's incline in deep center field, Tal's Hill, in the distance? Or were these actions the misbehaved children of a frenzied, inconsistent logical process? We don't know (and if you're asking me, we don't need to).

4. Let it be known that Tal's Hill was finally granted meaning last night. It was built as part of a cynical attempt to manufacture character and old-timey nostalgia in a state-of-the-art stadium occupied by a team named after men who walk in space and originally sponsored by a hyper-enormous energy conglomerate before later being sponsored by an international purveyor of high-fructose corn syrup. You think you can win my heart with a ****ing hill? You can't, but this gentleman did by using it to scale the wall. And in the process, he lent real meaning, real purpose, to what you built.

5. Credit where it's due: the security officer here seemed as though he was able to rip this gentleman down from the platform, but he didn't. He probably did so because he didn't want anyone to get hurt. A perfectly noble reason, and I like to think that he also had the presence of mind to know that one ought not tap God on the shoulder while He is painting.

And then, he was gone. Did he indeed escape? Multiple news outlets made mention of the incident, but none said that he was later caught. He has disappeared into the shadows of the center-field concourse and, as far as we're concerned, forever ceased to be.

He made it to the other side, wherever that is. Perhaps it is a glistening shore, perhaps it is a two-bedroom apartment in suburban Houston. Wherever he has gone, he has carried the forever-frustrated yearnings of our hearts, onward and forever.

A POSTSCRIPT: ESPN's Adam Rubin reports that this gentleman was indeed eventually caught.

The man who ran onto the field in Houston on Friday, ran up the hill in CF, leaped the outfield wall, ran up a berm, scaled a 2nd wall ...

... leaped over the second wall, landed on a concourse and made it out of the stadium was arrested outdoors, Astros person says.