The 137th running of the Kentucky Derby will take place this Saturday, and you probably don't know anything about any of the horses. We are here to help. Our first preview of the Kentucky Derby contenders covers the basics of Midnight Interlude, the Derby's horse most likely to meet you at the door wearing only a towel and holding a champagne bottle. 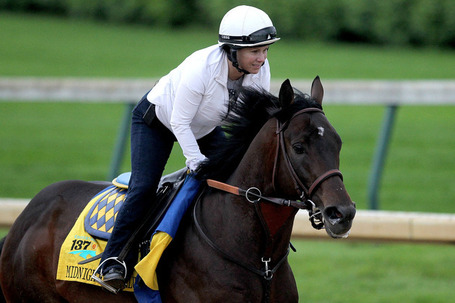 Description: The surprise winner of the Santa Anita Derby is one of three possible Bob Baffert entries into the Run for the Roses, but forget about all those other horses, girl. Midnight Interlude may have been on the track practicing this morning, but it's you that's been running around in his head all day. You like D'Angelo? Midnight has him playing in my stall like this all the time, girl.

Have you been working out?  He doesn't mean to be rude, but Midnight Interlude couldn't help but notice how toned you're looking. As an athlete, Midnight Interlude appreciates a lady who takes care of themselves. No, please: come in. he apologizes for the mess, but you see Mr. interlude has been busy serving as a late replacement for Mr. Baffert for the injured Jaycito. He's left these chocolate-covered strawberries and champagne glasses out, just sitting here! How careless of Midnight to do that.

But do try one, please. Midnight Interlude can't possibly eat them all by himself.

Midnight Interlude doesn't want to lead you on, girl. He wants you to saddle up and ride with him, but he's not like those other horses. The Santa Anita was only his fourth start, and even though he won Midnight needs you to remember something: he's tender, and new to this game. Be gentle with him, even with his super closing speed and stamina down the stretch.

The candles? Oh, how silly of him not to mention that. They're going green here in the stables. He could turn on the lights, but this is so much easier on the eyes, don't you think? Not that you need the help in that department, girl. [/winks] Look exotic oils and fragrances! How did these ever get out here?

[puts on Ready for the World]

Likes: Whatever pleases you, girl. As for Midnight's personal preferences? High thread-count sheets, long walks in the pasture, and just spending time to make things right for whatever you're feeling. Also: "Reasons," by Earth, Wind, and Fire; Secret deodorant, because Midnight's comfortable enough to admit it really is strong enough for a man; the movie The Joy Luck Club, because Midnight was separated from his mother at a young age, too, and understands the struggles of the beautiful ladies in that film.

Dislikes: Fillies who be playin', shallow lovers not ready for the real.

Current Odds: 1/15, though your chances of finding love and ultimate satisfaction with a smooth luva like Midnight Interlude remain a solid 1/1, ladies.

For more serious analysis of the 2011 Kentucky Derby, head to SB Nation's And Down The Stretch They Come.

Kentucky Derby 2011 Contenders: Get To Know Some Of The Field's Horses