Pro wrestling star "Macho Man" Randy Savage died in Tampa, Florida Friday morning just before 10 am ET, reportedly losing control of his black 2009 Jeep Wrangler while having a heart attack, then swerving to avoid traffic and striking a tree. In the photo below, you can see the impact the tree had on his car, which is surrounded in police tape. Thankfully, you can't see Savage's body itself in the picture. 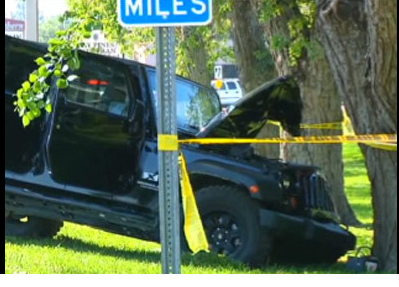 Savage reportedly had not been drinking, and both he and his wife were reportedly wearing seat belts. His wife survived the incident and was taken to a local hospital. The former WWF and WCW pro wrestling champ, whose real name was Randall Mario Poffo and who played stints in the minor league systems of both the Cardinals and Reds, was 58 years old.

For much more on Randy Savage's death, head to SB Nation's Cageside Seats.