The sports card industry flew off the rails in the 1990s, and Fleer's Metal Universe baseball, football, and basketball series may be the most disturbing evidence of this. Behold the terrifyingly funny majesty in the latest edition of Sports Cards For Insane People.

In the late 1990s, Fleer released a few series of sports cards named Metal Universe. "Metal" because the cards were foil-stamped, and "Universe" because it had s*** from the universe in it.

The sets were criticized at the time for being overly gaudy, and in retrospect, they're even weirder. I have no answers. I have no idea why we all suddenly started printing baseball cards of players fighting monsters in outer space and naming 98 percent of all children Josh and paying Joel Schumaker to make movies and feeding digital robot pets and listening to Collective Soul. I don't know! All I can offer is defeatism and pithy mockery.

Below are a dozen of the strangest cards from the Metal Universe baseball, football, and basketball sets. I could just as easily have added a few dozen more. I have no idea what the designer of these cards was thinking, so for each card, I did my best to imagine the thought processes behind them. Enjoy, and if you feel yourself slipping away from sanity, please take a break. 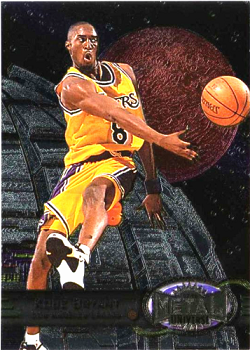 The pitch: Okay, I'm just gonna level with you here. I was kind of blanking on what to draw for this one. I was certain that I wanted to draw a red planet with squiggles all over it, but then I got stuck. So I hit pause on my boombox (you know it's serious business if i turn off Marcy Playground) and thought for a minute. And then it came to me. Kobe-wan Kenobe! Or Obi-wan Kekobe! Either one! I also drew a Death Star because that was a thing in the movie.

X-TREME RATING: as extreme as YOUR GRANDMOTHER RIDING A SKATEBOARD BECAUSE SHE JUST ATE A RADICAL BRAND OF CEREAL 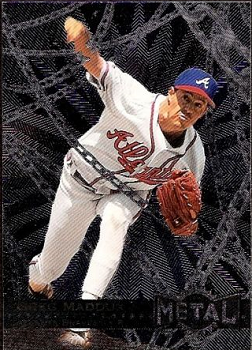 The pitch: Sure, Greg Maddux is one of the best pitchers in baseball history. But what if there were chains around him everywhere? Like he got caught in the web of a spider who made spiderwebs out of chains? I'm using chains as a motif to represent how hardcore Greg Maddux is. I heard one time he rocked out so hard to Toad The Wet Sprocket that his glasses almost fell off! But they didn't.

X-TREME RATING: as extreme as A STODGY BRITISH BUTLER WHO SUDDENLY STARTS RAPPING OR WEARING SUNGLASSES 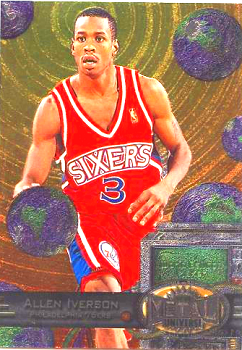 The pitch: I know what you're thinking: I'm off my Prozac (joke ripped straight from today's headlines)! Well, I was thinking about how much better our solar system would be if all the planets were just like Earth. That way, we'd have so much more room!

In addition to the planet Earth, I also like Allen Iverson and computers. That's why those two things are there. I also like mashed potatoes but they always end up looking like ice cream when I try to draw them, so I didn't draw them.

X-TREME RATING: as extreme as A SKATEBOARDING NON-HUMAN ANIMAL 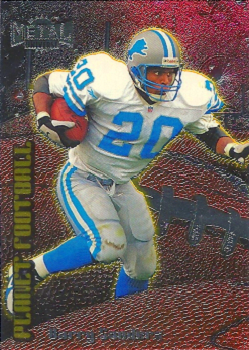 The pitch: Barry Sanders is always carrying around a football like it's the most important thing in the world. Well, let's knock him down to size with our "Planet Football" subset. We've transported him to a planet that is comprised entirely of footballs! The supply of footballs here is so extraordinarily high that your football is worth practically nothing! OF WHAT GOOD IS YOUR FOOTBALL NOW? You may as well just retire.

X-TREME RATING: as extreme as A TRAPPER KEEPER WITH A BUNCH OF SQUIGGLES AND RANDOM SHAPES AND STUFF ON IT 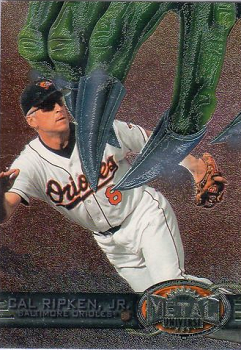 The pitch: Well, I wanted to draw Cal Ripken fighting a monster. Unfortunately I am only capable of drawing fingers and I don't understand what hands are or how they work, so it's basically just the Dark Lord Sauron giving Cal Ripken a t***y-twister. I have no idea how this is flattering or why anyone in the world would ever think this is neat.

X-TREME RATING: as extreme as DRACULA PLAYED BY A BLACK GUY 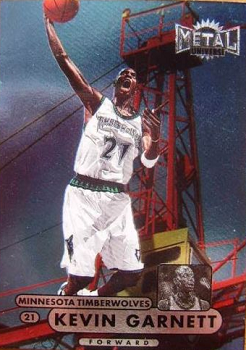 The pitch: Sorry, you guys. I know we're trying to go with a local theme for this set. Like, we have Michael Jordan dunking in front of the Sears Tower and stuff. Problem was, I couldn't think of a single Minnesota thing.

I thought of Minnesota and, seriously, all I could imagine was, like, some fat kid drinking a glass of milk in the middle of a field on a cloudy day. I was like, "I know Minnesota has plenty of stuff in it! They have a big city! They have skyscrapers, and an airport, and probably some really cool places to see!" But as hard as I tried, the only thing I could visually associate with the entire state was fat kid, glass of milk, middle of field, cloudy day. It's basically how I picture Iowa, only with milk instead of oatmeal.

So I had KG dunking on a cloudy day. I replaced the kid with a crane or something, because ... industry? Are there a lot of construction jobs in Minnesota? I don't know, probably.

X-TREME RATING: as extreme as EMILIO ESTEVEZ LEARNING THAT HOCKEY IS FUN AND LIFE ISN'T ALL ABOUT WORK 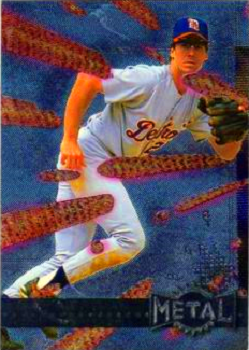 The pitch: I would love to give you an explanation for this that would be intellectually satisfying, but it's better just to level with you. I noticed that Travis Fryman's name has the word "fry" hidden in it and I got hungry and just started drawing flying loafs of bread. WHOOOOOSH!!! I am a horrible employee and should be fired.

X-TREME RATING: as extreme as SPF ONE BILLION TRILLION SUNSCREEN 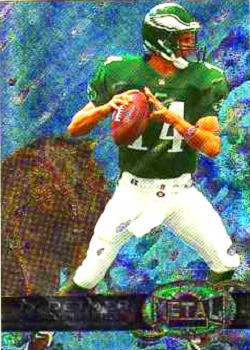 X-TREME RATING: as extreme as WESLEY SNIPES WITH DYED HAIR 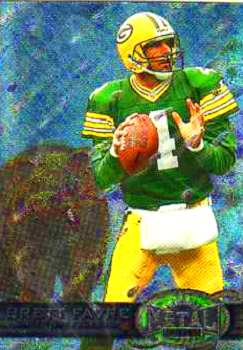 The pitch: Okay, sorry for the mix-up there. The elephant, of course, is a literal reference to the Green Bay Elephants-- AWWW CRAB APPLES 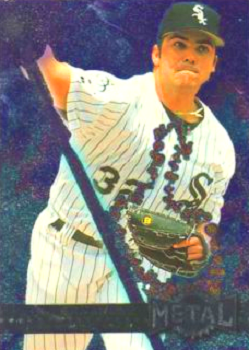 If you find yourself understanding why I drew an electrical field around Alex Fernandez's glove, and for some reason drew it to include his sternum area, take either more drugs or fewer drugs.

X-TREME RATING: as extreme as THE GUY AND GIRL FROM TBS' "DINNER AND A MOVIE" SHOWING US HOW TO MAKE "REMAINS OF THE DAY"-THEMED NACHOS 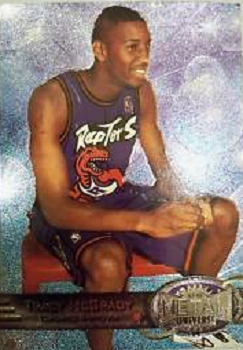 The pitch: There exists absolutely zero photographic evidence suggesting that Tracy McGrady has ever played basketball. This would be okay if this were a normal card set, because still shots of players are fairly commonplace, but it's kind of hard to justify a guy sitting down in SUPER EXTREME MONDO COOL OUTER SPACE LASER MUTANT ROBOT FUTURE F*** YEEEEAAARGH sports card set.

So here's the construct we're going with on this card: Tracy McGrady possesses the ability to teleport himself, as well as his Ocean Pacific shirt and a plastic stool that was clearly made for toddlers. He has chosen to teleport himself to the outer rim of the Andromeda galaxy, which is the approximate location of Toronto.

(Cards were researched with the help of two excellent resources for this sort of thing, Check Out My Cards and MillerCards.)