Over A Quarter Of The Field From Wrestlemania 7 Is Dead

Share All sharing options for: Over A Quarter Of The Field From Wrestlemania 7 Is Dead

Wrestlemania 7 happened in 1991, and yes, that is a long time ago. In 1991 a lot of things were different. You had to purchase pornography in person, Mobutu Sese Seko was still in charge of a country called Zaire, and America had yet to figure out that the sitcom Roseanne was a government plot to induce mass suicide from depression and thus reduce the government costs of rapidly expanding social welfare programs.

So some dudes from Wrestlemania should be dead. It's only natural that over 20 years, someone's going to die in a given population of adult men. Over twenty-five percent of them---14 of the 51 wrestlers on the Wrestlemania 7 card--seems a bit excessive, though, even by the frightening standards of survival you might expect from a sport infamous for fast living.

The Wrestling Observer Newsletter did the math, and it is not pretty, most especially when viewed in chart form. 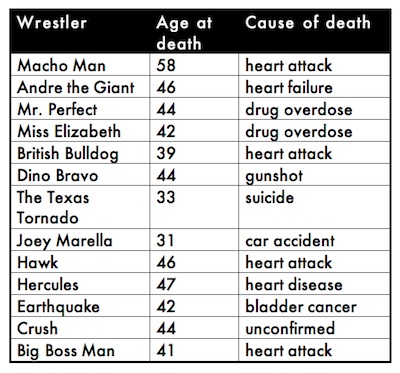 In comparison, none of the starters in the 1991 Super Bowl are dead, and worse still no musicians in the Monsters of Rock '91 tour are dead, either. We didn't mean to make the evil case that cocaine, alcohol, and groupies are better for you than steroids and road food, but alas, here we are. (Via The Clearly Dope via Yahoo via The Wrestling Observer.)