It's Looking Like They're Going To Knock Down Pittsburgh's Civic Arena

The fight has been waging since even before the Pittsburgh Penguins jumped across Centre Avenue to the brand-new CONSOL Energy Center before the 2010-11 NHL season: Can hockey fans and history buffs in town save Civic Arena, the old home of their hockey team?

(The naming rights owned by Mellon ended a year ago, for the record, and with them went the Mellon Arena name.)

There are no immediate plans for development at the Civic Arena site, but it's prime real estate right on the edge of Downtown, and there's no doubt that the Penguins want to redevelop the site. They own the rights to do so for 10 more years. Now, it's looking more and more like the local government will allow that to happen.

Back in September 2010, the Sports & Exposition Authority that owns the building voted unanimously to knock it down. There's been a push lately by preservationist groups to get historic status attached to Civic Arena that would prevent it from meeting the wrecking ball, but it's looking more and more like that won't happen.

From the Pittsburgh Tribune-Review:

The department has ruled that city council cannot give the arena a two-year "stay of execution," as some have asked, and cannot consider whether the arena's destruction would jeopardize federal funding.

The memo, obtained on Friday by the Tribune-Review, rejects some of preservationists' remaining arguments against tearing down the vacant entertainment venue, and the opinions detailed in it could clear the way for a preliminary council vote on the arena's fate on Wednesday morning.

Also yesterday, Councilman Ricky Burgess confirmed he will vote against giving historic status to the former home of the Pittsburgh Penguins, joining R. Daniel Lavelle, who represents the Hill District and the Uptown neighborhood where the 50-year-old Igloo sits. No other council member has committed to a position.

There are a lot of different forces at work here against the wishes of preservationists. While it would be sad to see such a cool looking, unique building knocked to the ground, there is something to be said for new development and the jobs and revenue that will be created in it's wake.

That's what's happening across the state in Philadelphia, as the old Spectrum was knocked down earlier this year in favor of a new retail and entertainment complex in the South Philly Sports Complex. It should be a fantastic complex when its first phase opens, supposedly in time for the start of baseball season in 2012, and it'll create hundreds, if not thousands of new jobs.

It meant the demolition of a hockey icon, but in the grand scheme of things, it's probably for the best.

Something similar could happen in Pittsburgh. At the same time, there's a pretty awesome idea to preserve the Igloo that was publicized by fans about a year ago: etch the outline of the arena on the north-facing window of the CONSOL Energy Center that currently overlooks it.

Via the Facebook page Memorialize The Mellon Arena, this photo gives you an idea of what that'd look like. 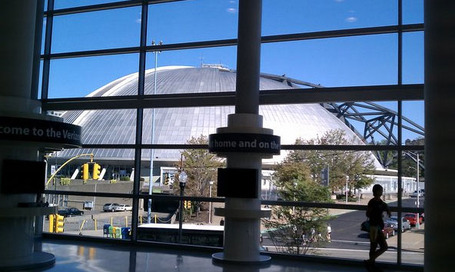 How perfect would that be?

They're going to knock down the building, and that's probably for the better. Might as well remember it with an awesome tribute.

For more on the Penguins, visit SB Nation's Pensburgh.