Complete And Thorough Incompetence: Your Guide To The 2011 Pick-Up Basketball Season

NBA season is over, but as we approach the dead of summer, pick-up basketball is in full swing. Before you take to your local park, rec center, or driveway, familiarize yourself with the opponents and elements you will encounter.

Share All sharing options for: Complete And Thorough Incompetence: Your Guide To The 2011 Pick-Up Basketball Season

Basketball never sleeps. By the time the large-scale spectator leagues finally shut down, the weather is nice enough to go outside and play it ourselves. Sometimes, it's an impressive experience -- the courts are well-suited for play, the ball has a good feel to it, and the players involved are generally competent.

Far too often, though, pick-up basketball games are a nightmarish mess, a dimly-lit tumbleweed of sweaty arms flailing in the general direction of the ball. You may well find yourself in such a scenario, so before you hit the court, get familiar with the following venues of play, types of basketballs, and players you will encounter. 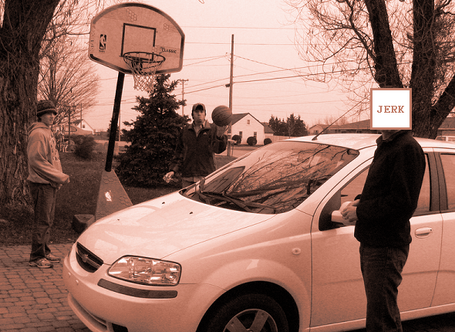 Your friend's driveway is adequate enough -- relatively flat, decent goal nailed above the garage, etc. -- but his roommate insists on parking his car eight feet in front of the net, even though there is more than ample room at the front of the driveway or on the street. He then immediately makes a beeline for his bedroom, blares Puddle of Mudd on his boombox, and falls asleep for an indefinite period of time.

You and your friends attempt to play anyway. While going for a loose ball, you gash your elbow open on his hood ornament. Given that the entire playing area is limited to approximately 80 square feet, the court is very crowded. Eventually, you start taking the ball all the way behind his car and launching uncontested long-range shots.

Eventually, the roommate stumbles out of the house and mumbles, "don't be playing basketball around my car." He turns to your friend and insists, "y'all need to get one of those Ding Kings and fix them motherf***in' dents if y'all get any dents in it." Your friend replies that he can't because the Ding King guy is dead. The roommate then stumbles back inside, at which point play resumes. His name is always Mike. 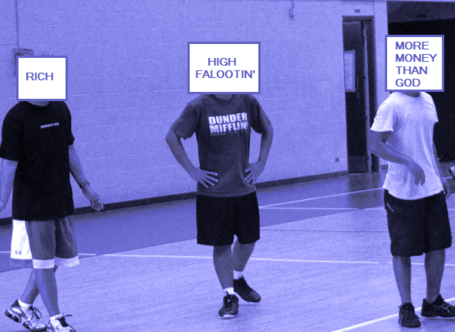 If you are playing pickup basketball in an indoor basketball court, everything is great because you are a rich person. Disputing this statement suggests that you are not only a rich person, but a rich spoiled giant baby who does not even know how lucky you are and who is literally all like "waaaaah I'm not rich enough waaaaah" literally all the time, including this very instant.

Or you're in college. Whatever.

The roll-out goal that nobody ever bothers to weigh down 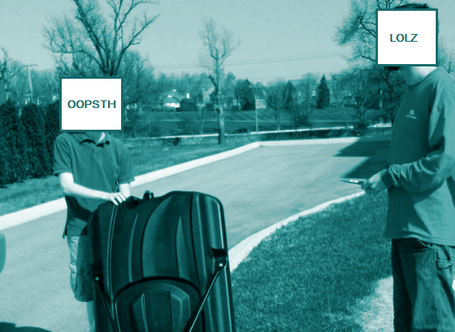 The base of the goal is supposed to be filled with sand or water, but never is. This is the closest that marginally athletic 5'10" dudes will get to having a "send it in, Jerome" moment. They will quote it in Dick Vitale's voice rather than Bill Raftery's, and when they think of Dick Vitale, they will picture Rodney Dangerfield.

The court with lights that turn off 20 minutes after sundown 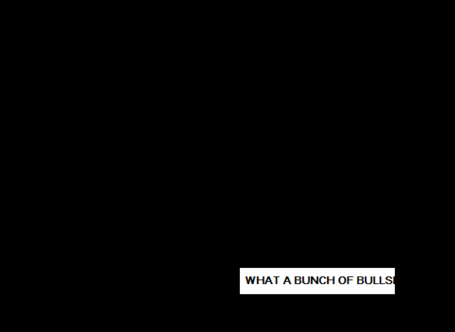 Of course, it makes no sense to have overhead lights and to turn them on, only to shut them off a few minutes later. They turn off at 9:14, so it's not as though it's in accordance with some city ordinance, because what city ordinance would require lights to be shut off at 9:14 rather than 9:00 or 9:30?

You consider talking to someone in the parks department about it, but then you realize that you have no clue of how to communicate with your municipal government aside from calling 911 or voting.

The court with insufficient lighting 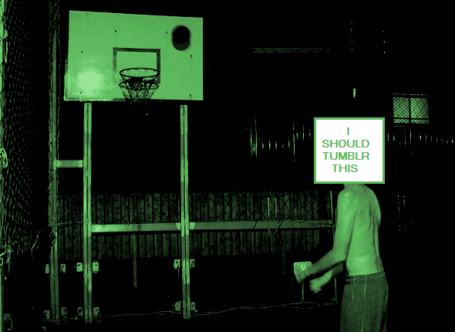 Decades ago, someone erected a flood light on an asphalt lot. The original intended purpose of this light isn't precisely clear, but we do know that it sure as hell wasn't meant to illuminate this basketball court from 40 feet away.

Compounding the problem: the net has long ago frayed itself loose from the rim, meaning a clean swish can be neither seen nor heard. You will often have to rely on your opponent to tell you whether you made a shot, making this less like basketball and more like a game of Battleship in which you run significant risk of breaking your nose.

Basketballs tend to bounce off rims and hands at unpredictable angles. Sometimes the ball will rest perfectly into your hand; other times, it'll glance off your fingertip and bend your finger back, or smash into your finger like a hammer into a nail. The joints in your finger swell up, limiting its mobility and ensuring that it will probably be jammed up again at some point.

This is an especially critical problem if you're playing with one of those heavy outdoor eight-dollar jobs they sell at Walmart. After a time, your fingers will turn into swollen, useless links of breakfast sausage, and you'll come to favor the bases of your palms to perform duties basketball-related and otherwise. TRUE STORY: in order to drive this point home, I originally attempted to finish this paragraph by typing it with the bases of my palms. Somehow, I managed to close my browser and lose about 300 words' worth of work. No joke.

The ball with a built-in pump

It's a ball with a little widget that you pull out and pump a few times. Conceptually, it's cool; in reality, it weakens the structure of the ball, and the ball eventually grows a nipple. It's called basketball, not boobsketball. I realize that this is a divisive opinion, but I hold to it all the same.

This ball is about 20 years old by now, and has been rotting in your mother's garage for over a decade. You may be tempted to use this ball as a last resort, but if you crack its petrified rubber shell, it will release vintage-1991 oxygen. That s*** is dangerous. Look at what it did to 1991. Snap bracelets! God. 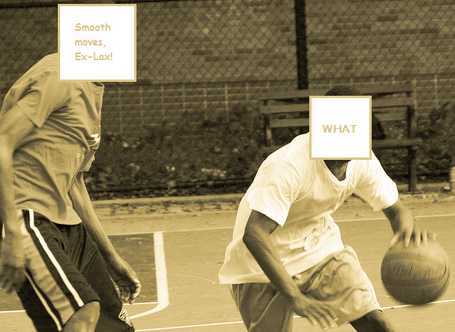 This guy is perhaps five or ten years older than you are, he's in decent shape, and he's fairly good. His vernacular, however, is almost impossibly foreign. If you take a tough pass and lay it in, he congratulates you with, "good hands, Allstate!" Who? WHAT? You look again. He can't possibly be much older than you are, and yet there he is, talking like he's the guy who works in the cubicle next to your dad's and has Doonesbury cartoons stapled everywhere. He won't fit into the neat little boxes into which you have partitioned humanity, and it's disgusting.

The guy who tries to play in slip-ons 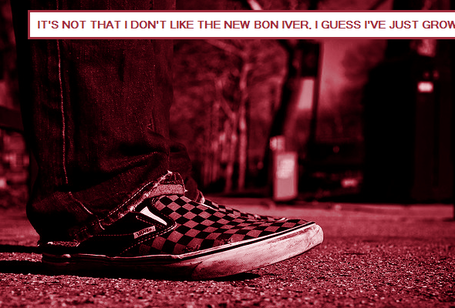 This is an epidemic in hipster* neighborhoods. Slip-on shoes are terrific when you're standing around and talking about Sleigh Bells; they are not as terrific when applied to the pivoting, jumping, and stop-and-go herky-jerk of basketball.

If you're playing basketball in slip-ons, you're not really wearing shoes. You're standing on a pair of high-friction leather tectonic plates that are slapping around on a bed of asphalt. Your foot is going to turn into a giant foot-shaped blister, and you're likely to crack a toenail at some point.

*If you believe the term "hipster" has been outmoded or over-used, you are a hipster. 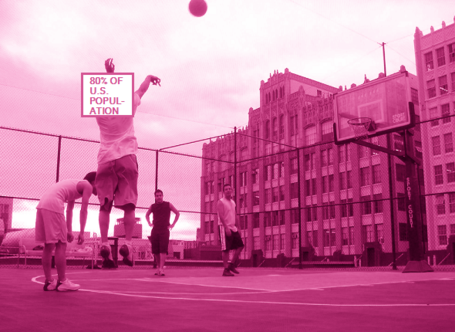 This fellow is capable of running, and he is also capable of dribbling a basketball, but doing both at the same time tends to be problematic for him. As such, even if the lane is wide open, he prefers to throw up a jumper from 20 feet away.
When his team is on offense and he doesn't have the ball, he doesn't really know what to do, so he just runs up top and passively calls for the ball by silently holding his hands in front of him. In other words, he is a one-tool doofus who is me.
By the way, you may also run into this guy's cousin, who is more or less the same only he has absolutely zero shooting ability to boot. When he airballs a shot, which happens often, he will emit a pseudo-self-effacing noise of some sort. Sometimes he will cackle at himself, as though to express, "I'm such a free spirit, I'll shoot from anywhere."
After a while, though, he will cycle through the utterances, "guh," "gah," "oh my God," and "aw s****." By the end of the game he will be gesturing toward the goal and wheezing incomplete/grammatically incorrect sentences about the quality of the rim.
"There's no just give on the rim today!"
"I don't even bounce off it!"
"There's just nothing won't fall, man!"
"I just even don't know, that goal, just in and off every day."
Et cetera. 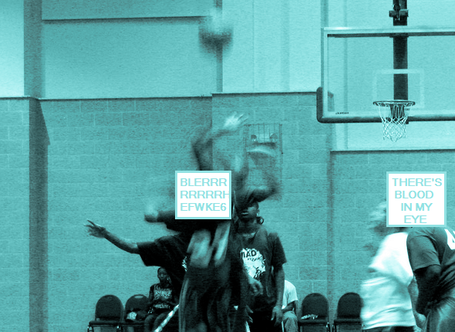 If this guy is playing, you will need to start calling fouls. Basketball as we know it -- a game complete with rules that allow the ball carrier room to work -- is foreign to him, probably because he doesn't play very often. He awkwardly heaves his gangly frame in the general direction of the basketball, leading with his arms if he can help it.
If you're holding the ball, he will simply attempt to grab it away from you, and a look of helpless confusion washes over his face when he is called for a foul. And if there is a loose ball, God help you.
I am kind of bad at basketball, but I like to think that I am the quiet, harmless kind of bad, and not the kind of bad that will leave you with cauliflower ear, scratch your cornea, or sprain your jaw with my elbow. If you can withstand the largely-unintentional physical abuse, you'll be in good shape, because this guy is singularly incapable of accomplishing anything basketball-related on the basketball court.

The 11-year-old kid who insists on playing 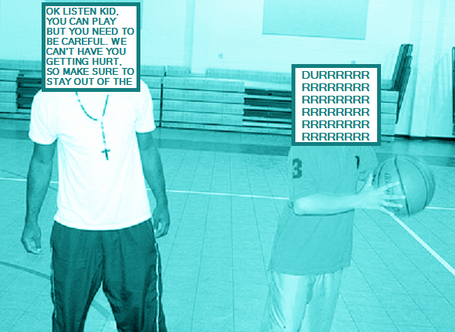 It's common knowledge that children are idiots; of course, this truth doesn't really dawn on us until we reach adulthood and observe their behavior.
This is how it works: you, an adult, are playing basketball with fellow adults. You notice an 11-year-old kid patiently waiting behind the goal. When the game ends, he asks if he can play. You look around at your teammates and opponents. None of them have the heart to tell him to get lost, so you begrudgingly allow him in the next game.
The experience is instantly ruined for almost everyone involved. The kid boxes everyone out on rebounds, tackles shooters by the wrist, and flails his arms about to no distinct avail. No one touches him because everyone is terrified of hurting him. Emboldened by this, he calls you a chickenshit, which you are, because you are allowing a dense half-person to ruin your good time. 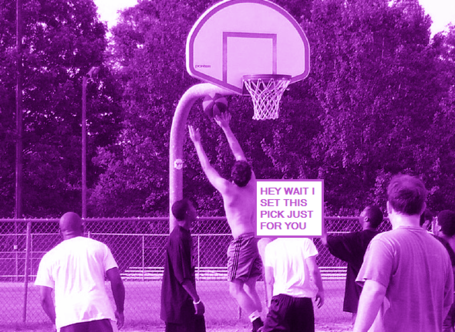 We cannot end this discussion without addressing this guy. He has seen just enough basketball to notice that players occasionally set picks, but not enough to understand what they are actually for. He rightly recognizes that he best serves society as a fencepost, but his picks, which he sets on nearly every play, are usually counterproductive.
Unbelievably, he often sets picks on his own teammates, and on one occasion, I have actually heard him express disapproval when his pick was ignored. "I picked you, dude!"
Of course, these are only a few players to watch out for. You'll also need to get familiar with Guy Who Is Incapable Of Not Answering Cell Phone, Guy In 21 Game Who Somehow Forgets To Tip Every Single F***ing Time, and Only Guy On Court Who Is Talking Trash.
Photos found via Creative Commons.