Will You Ever Celebrate A Championship? How Sports Towns Have Rewarded Their Citizens

How long have you waited for your teams to win a championship? How long is too long to wait? Is it possible that sports will never reward your loyalty? Let's look at the data.

Share All sharing options for: Will You Ever Celebrate A Championship? How Sports Towns Have Rewarded Their Citizens

How did your favorite team come to be your favorite team? Well, even if there are multiple factors at work, geographic location probably dwarfs them all. Your team is the Royals because you were born and raised in Kansas City, or you lived in Wichita and there were no closer teams, or you live in Omaha near the Royals' triple-A team, or something. Or, despite living in KC all your life, you're a Yankees fan because you recognized at a young age that the decision ought to be your own and that since sports are supposed to be fun, you ought to follow the team that seems like the most fun to follow (read: you're a stupid piece-of-crap baby).

Perhaps you're 80 years old. If you aren't, suppose you are. You have lived your life in western Missouri, and as an avid sports fan, you've seen your teams win two championships throughout the entire course of your life. You have the Chiefs and Royals. The NBA's Kings were in town for a while. There was even an NHL team for a couple of years.

You could have been born elsewhere. Your father, all the way back in 1930, could have stayed put in eastern Missouri instead of taking that job at the meat packing plant in Lenexa. You would have yoked yourself to St. Louis' teams, and you would have been treated to seeing your team win eight championships. That's one every ten years. That's pretty good.

If we can agree that the teams you follow are probably almost entirely a function of where you grew up, we ought to try and rip apart some data. Consider that there are plenty of 80-year-old sports fans out there, and you really ought to consider them, because hopefully one day you will be one.

How were these folks treated by the brave industry of major professional sports in America? Did they reward their near-century of allegiance through times good and bad? Have they done right by them? Have they let them down?

How many championships do you think this fan ought to be able to enjoy throughout his life?  What is the bare minimum? Think about your answer, and then take a look at the map below. 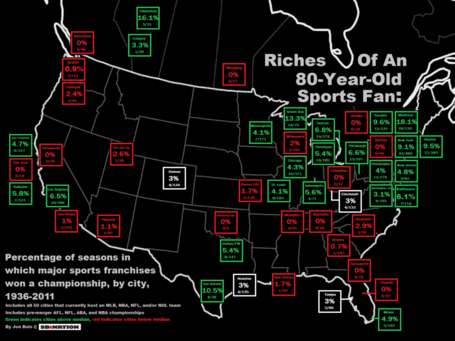 I took a look at all 50 American and Canadian cities that currently host an MLB, NBA, NFL, or NHL franchise. Then I looked at how many seasons those franchises have played, and how many championships they won from 1936 to the present. With that data, I calculated the percentage of total seasons in which the city's teams won championships.

For example: Chicago has won a championship in 4.3 percent of its total sporting seasons over the last 75 years. They won 16 championships out of 371 total Cubs/White Sox/Bulls/Bears/Blackhawks seasons. (Remember, I counted pre-merger NFL and AFL championships, as well as pre-merger NBA/ABA crowns.)

I selected 1936-2011 as the data set so that we could look at what this 80-year-old has seen, and how many championships he's been able to enjoy. (I started at 1936 instead of 1931 because I didn't want to cheat him; after all, you can't possibly appreciate what a championship actually is before you're five years old).

I don't think this data is predictive in any specific sense. I see it more as as a report card. If this 80-year-old has spent his days in the Midwest or Northeast, he made off a little better than usual. If he lived in the South, he had to wait so long for major franchises to move there that he hasn't had much of a shot. And if he lived in Seattle, well, God help him.

Now, one major limitation of this data is that it lumps all sports together. Plenty of Celtics fans in Boston can't name two men on the Bruins' roster. I arranged the data this way because I feel as though the fan experience is very different now, and will be even more different 30 years from now, than it was in 1980. My father isn't interested in the NBA, but I sure am, and I wouldn't be surprised if some future son or daughter of mine defies my failures and embraces the NHL.

The breakneck acceleration of technological advancement has been able to knock down plenty of barriers, but Chicago is still the five-hour drive it was in 1950. Location will still matter for the foreseeable future: there is no fitting substitute for actually going to a game, and if you live in Dayton, your family is probably taking you to Reds games rather than Indians games.

So, although this data isn't necessarily predictive, I am taking away a few lessons and observations:

P.S. Lots of data was stacked together to create this report, so it's quite possible I made an error here or there. If you see one, please let me know.