The 1995 Emotion baseball card set assigned a single word to describe each player. It was going so well... until they started running out of words.

At some point in the 1990s, the sports card industry decided that sports cards were too emotionally distant, that they needed a personal touch. This is the line of thinking that ushered in weightlifting Mike Piazza and Cal Ripken being attacked by a giant lizard monster, and it also led to Fleer's 1995 Emotion set.

Think "cologne advertising agency figures that producing baseball cards might be fun," and you pretty much have the idea. And I'm not talking about Ralph Lauren, I'm talking about gas station cologne. You know, the stuff in the display, sitting on the counter next to the 5 Hour Energy, with dated beefcake on the front of the box. 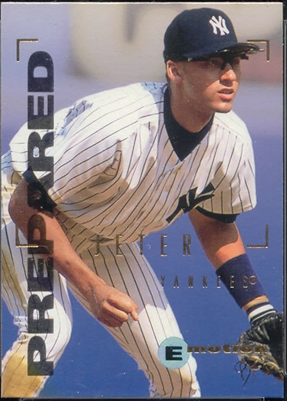 This was the general format: each player was assigned a word (usually an adjective) that was meant to be somehow descriptive or emblematic of that player. Some of the words work. Frank Thomas is "AMAZING." Sammy Sosa is "STYLE." Greg Maddux is "DOMINATING." Et cetera.

And then, at some point in the early going, these cologne guys stopped, sat bolt upright, and realized that there are like 700 of these baseball-playing assholes and that there aren't nearly enough sexy descriptors to go around. 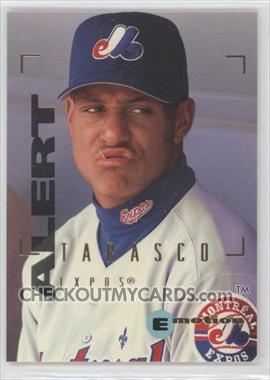 Tony Tarasco was drafted for his profound ability to respond to stimuli and know what is going on. One time someone said, "hey, Tony!" He replied, "yes?" He is a sentient being, through and through. 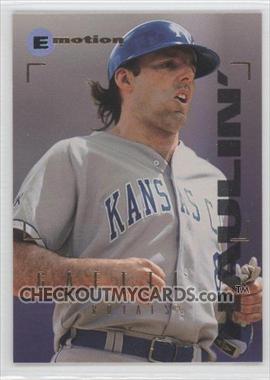 In his free time, Gary Gaetti enjoys hauling things, usually ass. He's such a hard worker that he doesn't have time for ear flaps on his helmet, because ear flaps take up time somehow. He is gorgeous. 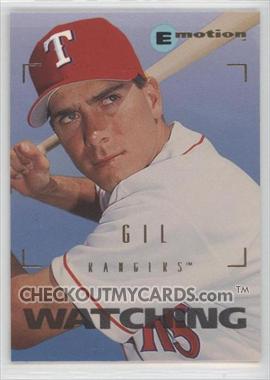 Benji! Benji, honey, eyes on the ball. That airplane will still be there in five seconds. Benji! (I'm so sorry about this.) Benji, come on, we're taking you home. I'm going to stop taking you to baseball if... oh no, honey. No, the people in the airplane aren't flying to Heaven so that God can chop them up and eat them. Who told you that? ...all right, then, I'm going to have to speak with Rusty Greer's mother. 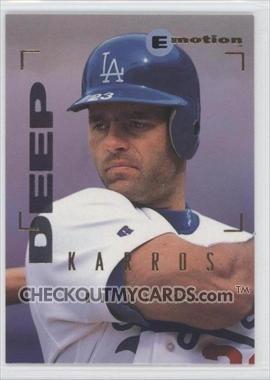 Okay, wait, haven't we covered this ground before? Remember?

In his spare time Eric enjoys shooting hoops and weightlifting.

Eric Karros is a lot of things, but... actually, wait. He is very few things, that's the point. He ain't deep.

Smells like: the warehouse where they mass-produce forgettable Dodgers rookies 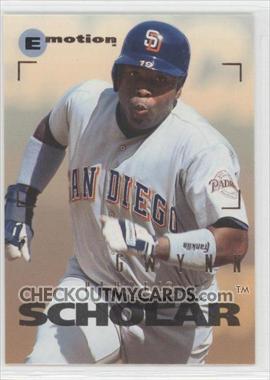 Huh? What does-- ohhh, because he's a Well-Spoken Black Man. Got it. 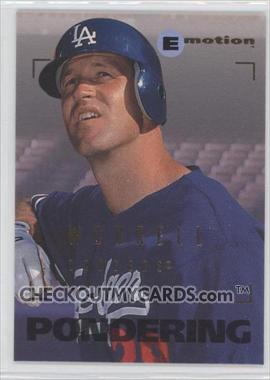 Things Todd Worrell may be pondering:

Smells like: the guy at the coffee shop who holds an open Bukowski book but just stares out the window the whole time he's there 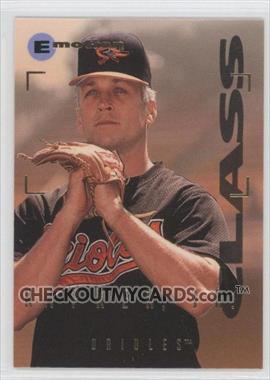 My God, the baseball world's infatuation with Ripken in the mid-1990s was the most unbearable thing ever. Here's what Ripken was: a great hitter in his twenties who regressed in his thirties but benefited from a cocktail of favorable genetic factors, good fortune, and the willingness to play through occasional minor injury, and who, by all accounts, was a decent guy.

In this, the baseball world perceived some sort of supernatural combination of greatness and friendliness and called it "class." When Ripken approached Gehrig's record, he set off a years-long symphony of "he plays the game the right way" and "he plays the game with class" and "he classes the class the right class classy heart shows up every day class" until some other players finally took enough steroids to blow his wistful ass from the forefront of baseball's consciousness.

Like 99% of major leaguers "play the game with class"! Like 99% of major leaguers would never miss a game if they could help it! Jesus Christ! They should expand the Hall of Fame to include every baseball player except for Ripken and then build a bus stop right outside the front doors and sculpt a statue of him sitting on the bench and crying. Beside him there would be an animatronic Kenesaw Mountain Landis, whose arm would extend a cookie in Ripken's direction only to retract it and play a recording of maniacal laughter. Over and over.

I'm actually a fan of Ripken himself, but that's the only thing that could possibly satisfy me at this point. 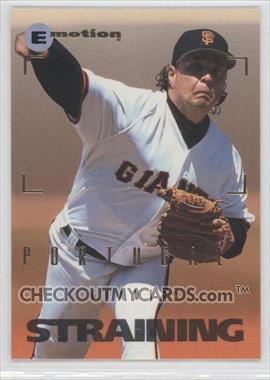 Uh... hey, guys, can someone go out there and check on Mark? He ain't looking good. He's really straining out there. I think he might be sick or something. Let's, uh... okay, you want to leave him out there one more year? All right, one more year. Let's check out his 1996 Emotion card. 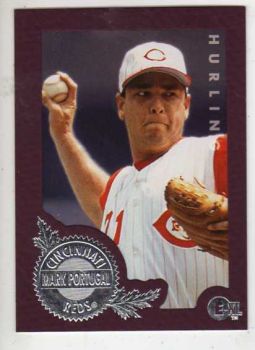 Yeah, he, uh... I guess he was sick. Ahhhh gross dude. That is gnarly. 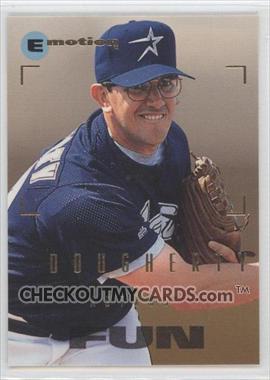 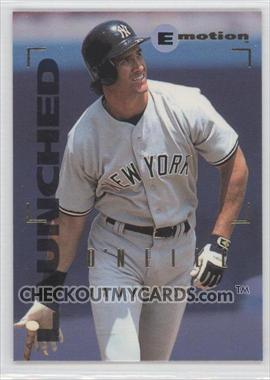 "Yo, dude, what's good? I got so. Freaking. Launched last night. I was gonna take it easy last night, maybe just drink a beer and watch some Beavis and Butthead or something, you know, just mind my own s***. Then Bernie calls and he's like, "whaaaaat you gotta meet us up at the Chili's, they got half price--"

[You put down the phone, put your clothes in the dryer, pick up the phone]

"-- Jeter's not old enough to buy beer yet so I was like, 'fine, I'll just get some Keystones, just stay here and be cool.' And by this point I'm just completely launched --"

[You put down the phone, take out the garbage, pick up the phone]

"--if his dumb ass think I'm paying for his moped, he doesn't know the first thing about the Paulmeister. Remember that time he got Mike's Hard on my Genesis? Pfft. Anyways, later tater. Schhhhhmokin'! Jim Carrey quote." [click]

Smells like: A bonfire of Trapper Keepers that was recently doused with Zima 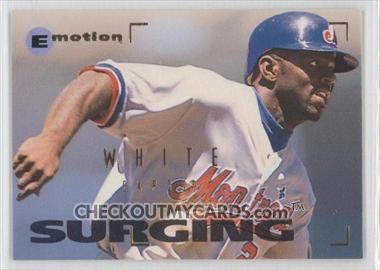 The 1990s levels of this baseball card, even as 1990s baseball cards go, are off the charts, in part because Rondell White is probably one of the ten most 1990s players of all time. Anyway, Rondell White would go on to play a total of one season of more than 140 games in his career. SURGING!!~ 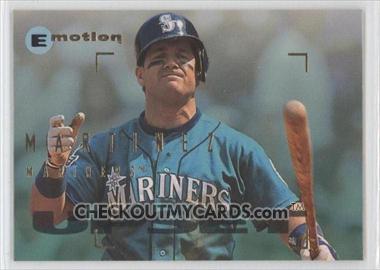 At some point, Fleer had to start scraping the bottom of the barrel. They could have tried to salvage this with the blurb on the back; they could have written something like, "he's UPSET over his 1994 performance and determined to do better!" Nope, nothing like that. They clearly just settled on the first picture they found and deduced that he was a crankypants.

ON DECK, by EDGARDO ALFONSO 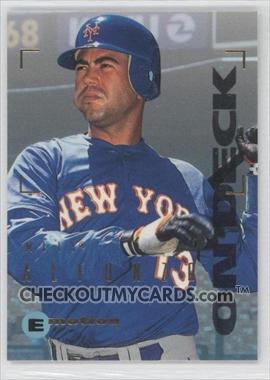 Oh, come on, you guys. Look, I mean, I know it's 1995, and the baseball card bubble is about to burst, and this is no longer a growth industry, and you're probably trying to secure a job with Hallmark or something, but seriously.

When I was seven years old, I wanted to design baseball cards when I grew up. My friends and I would design our own crappy little cards and get excited about them. We even thought about mailing them to Topps so that they could use our designs for free. It was my dream job. And you have this job, only to totally mail it in? "ON DECK"? Because he was literally on deck at the moment the photo was taken? No, y'all. That dog won't hunt.

And, finally, a list of words the cologne people at Emotion were willing to deploy if this series dragged on any further:

Most of these images were found on Check Out My Cards, an unbelievably comprehensive archive of old sports card sets. Give it a look, as long as you're okay with getting lost in it for a half-hour.