This year's Home Run Derby will feature a bunch of home-run hitting galoots. It's easy to take that for granted until you remember Hubie Brooks.

Prince Fielder is the team captain for the National League team in the 2011 Home Run Derby. David Ortiz is the team captain for the American League. Those two have combined for 580 home runs in their careers. They are big, big dudes. When you think of home runs, you think of big, big dudes swinging as hard as they can, and Fielder and Ortiz are archetypical Home Run Derby participants.

But they can't all be Fielders and Ortizes. In the 25+ years of the All-Star Game tradition, there have been some contestants in the derby that have been less than obvious choices. Here are the five oddest names to show up in the Home Run Derby:

Jaha hit 35 home runs in 1999 and actually picked up an MVP vote. The next season, he had one of the most bizarre lines you'll ever see: 97 at-bats, one double, one home run, and 38 walks. He was like Luis Castillo with his feet duct-taped together. There are players who suddenly stop hitting, and then there was Jaha. 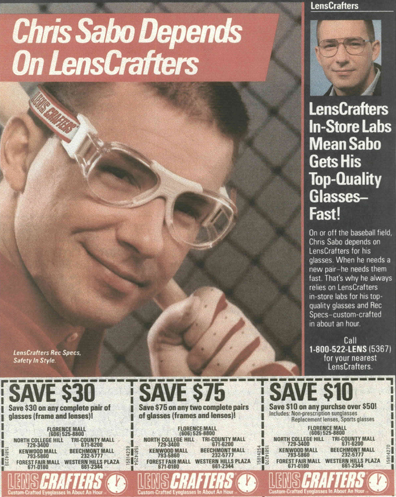 He didn't have a really long career because he wasn't a great contacts hitter. Also, these words appear in the above ad: "rec specs."

3. Hee Seop Choi, 2005 (career home runs, 40; career high - 15)
The 2005 Home Run Derby was a little bit odd in the representatives were chosen to represent a country, ostensibly to get the world ready for World Baseball Classic fever, so Choi was the de facto choice for South Korea. He's almost certainly the only player to hit in a derby who never cracked a roster again in his career.

After hitting .253/.336/.453 -- a better line than James Loney has had in four years -- for the Dodgers in '05, Choi never played in the majors again. He was waived the next spring, and flamed out of Boston's system that year.

And he has one of the better "Achievements" sections of any player on Wikipedia:

2. Ozzie Virgil, 1987 (career home runs - 98; career high - 27)
Of the eight players named Ozzie to ever play in the majors, Ozzie Virgil, Jr. was the only one to ever reach double digits in home runs. He had 27 in 1987, which is just one fewer than the career total of the two players -- Ozzies Smith and Guillen -- who are tied for second place on the all-time Ozzie list.

But this wasn't the Ozzie Home Run Derby. This was the actual Home Run Derby, with a pool of participants who were selected from about 400 or so major league hitters. How in the heck did an okay-hitting catcher get invited? The answer is in the splits:

He hit more home runs in the first half than he ever hit in another season, and he ended his career by guiding Dante Bichette through Dodger Stadium.

1. Hubie Brooks, 1986 (career home runs - 149; career high - 20)
He has the most career home runs of anyone on this list, but that's because he played for 15 seasons. Brooks was a shortstop when he was selected for the '86 Home Run Derby, and his career high to that point was 16 home runs. The answer, again, was in the splits. 14 home runs in the first half, and 18 at-bats in the second. To be fair, 14 home runs was kind of a big deal for a single half back in '86. Only three hitters topped 30 home runs in the NL, and 21 home runs was good enough to crack the top ten.

Still, Hubie Brooks, Home Run Derby contestant. Andre Dawson was on that '86 Expos team, but it was Hubie Brooks who went to the Home Run Derby. I'm trying to think of a good comp to express how funny it seems in retrospect. Kevin Kouzmanoff? Joe Randa? Bill Hall? Any of those will do. And Brooks reminds us all of two great baseball truths:

More Hubies, more Ozzies, and more rec specs, please. The Home Run Derby is as good as an exhibition before an exhibition can get -- and while it's fun to watch players like Fielder and Ortiz hit 500-footers, there should always be a spot for a totally random player just to amuse us in subsequent decades.