As the NBA lockout crawls on, we're left to wonder that if the league is in such financial peril, why are very rich men paying huge sums of money to buy teams?

A week into the 2011 NBA lockout, franchise owners and their high priest, commissioner David Stern, are still having trouble convincing the world that the 30 NBA teams are collectively losing hundreds of millions of dollars every year. It just doesn't make sense, and a small army of skeptics continues to look for the keystone that will unlock the league's financials and show what a scam this all is. But really, it might not be a scam. These dudes might actually be losing their shirts. (That raises a whole series of questions about Stern's job performance, of course.)

But one thing owners still can't explain away is the impact of rising team values, and as an avatar for this trend, huge recent purchase prices. The rising team values in the NBA are a two-pronged attack on the owners' position. Most nakedly, it's another cannon blasting at the claim that this is not a profitable league. Ratings soar, the gate soars, merchandise soars, team value soars ... and y'all can't turn a profit? PFFFFT. Maybe that's overly simplistic, but it's an easy line of thought to grok.

The other more powerful prong is that it diminishes the pleas of the owners to something like sniveling.

Ignore overmatched teams like the New Jersey Nets of the past few years for a second. The Nets do not in any way represent the plight of a normal NBA team in normal circumstances. So when that team loses $44 million in a bad but not grotesque season, I don't think it says anything about the league as a whole. (Side note: the financials presented Thursday showed that the Nets earned $25 million in ticket sales in 2008-09. The Hornets, in a sub-spectacular playoff season in post-Katrina New Orleans, earned $45 million in ticket sales that same season, according to those leaked financials at Deadspin. God, the Nets are sad.)

Last November, before lockout rhetoric fully bloomed but was certainly sprouting from the ground, I looked at what current owners paid for their teams and what Forbes said they were worth in their most recent annual team valuations study. I omitted teams that had just been sold (Nets, Wizards and Bobcats). This is the graph I put together. Original purchase price is everything to the left of the stacked dot tower lined up at 2010; most recent valuations are, uh, stacked at 2010. 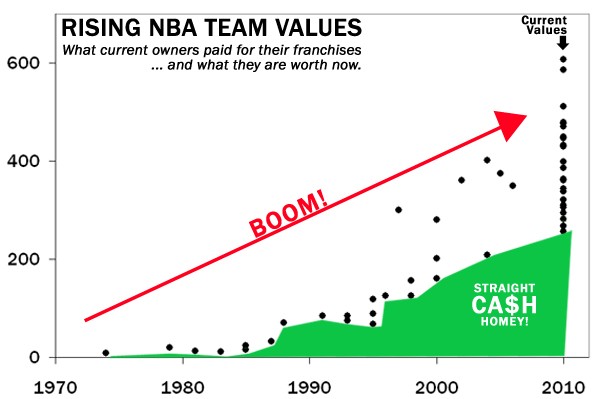 My analysis then concluded that the 27 owners in question had seen their franchises' value grow $6.5 billion since purchase. A quick self-blockquote:

Since then, the Pistons have sold for $450 million -- that left-most dot on the chart is Bill Davidson buying that franchise for $8 million in 1975 -- and the Sixers are expected to go for something like $350 million after Comcast bought the team for $125 million in 1995. It's also worth noting that the NBA owners themselves bought the Hornets for $300 million; George Shinn founded the franchise for a cool $32 million in 1987. So while Shinn cried poor, and while owners cry poor, all they have to do is stick a "for sale" sign out front and those losses turn into massive, massive profits.

That's the backdrop of this labor battle: the players may not be providing annual operating profits, but they are sure as spit lining these owners' vaults with gold. To connect franchise values and sales to salary may be impossible. But perhaps in presenting its case to the players and public, the NBA could and should include some notation of rising franchise value that surely offsets a lot of the annual losses. For a healthy league, the NBA needs to make money every year -- that's not in dispute. But crying poor while the Warriors (one playoff berth in 16 years) sell for $450 million sounds a lot like crying wolf. The league needs to talk openly with the union about team values, team sales and the disconnect between that and annual operating losses. There are a number of elephants in the negotiating room, but this may be the largest.

To head off one regular argument: Stern has said publicly that the newer owners who paid a fortune for their teams did so under the belief they'd be getting a favorable new labor deal right about ... now. That's the biggest attempted bulls--t of the labor talks yet. "But ... but .. I paid $450 million for the Pistons! I wouldn't have done that if I'd known the new labor deal wouldn't let me set Charlie Villanueva on fire!" Sorry, chaps, it doesn't work like that.