Thursday night, due to unforeseen circumstances, Twins catcher Joe Mauer was forced to play right field. It turns out that right field is an embarrassingly easy position to pick up.

Share All sharing options for: Joe Mauer Shows That Right Field Is The Easiest Job In The World

A lot's been going on with the Minnesota Twins lately. Regular center fielder Denard Span was placed back on the disabled list with concussion symptoms. Michael Cuddyer has been battling a neck problem. Matt Tolbert has been battling a wrist problem. Jason Kubel had to go to California due to a family matter. Light on players, the Twins recalled Luke Hughes from triple-A, but Hughes went to the wrong gate at the airport and missed his flight. In short, it's been a complicated mess, and still the Twins had to play a game against the Yankees Thursday night.

Ron Gardenhire had to construct a full lineup. And that meant that Joe Mauer was forced to play right field.

Justin Morneau has a small bit of prior outfield experience. Why not Mauer at first, and Morneau in right? Simple: Gardenhire didn't want to play two people out of position. One was enough.

And boy, was Mauer ever out of position. Joe Mauer, of course, is a catcher. Over his entire professional career, he had played 980 games at catcher, and 26 games at first base. His past experience in the outfield?

While addressing reporters before the game, Mauer wore Kubel's outfielder's glove and tried to think back to the last time he played anywhere in the outfield.

Pressed for details, he said: "I think I played right maybe one game. I can probably count on my hands how many times I've been in the outfield, ever."

For all intents and purposes, Joe Mauer had never before played the outfield. Certainly never as a professional, going back 11 years. There was reason to worry, then, that he might embarrass himself. Baseball is hard. Playing defense in baseball is hard. Playing defense in baseball requires a lot of position-specific experience. Without the reps, it stands to reason that a player might look like he doesn't know what he's doing.

At least, that was the concern. But what the concerned parties neglected to consider is that right field is the Easiest Job in the World. 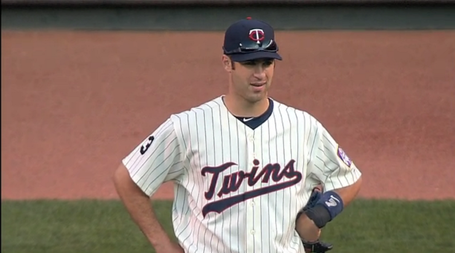 And Joe Mauer did just fine.

As a right fielder on Thursday, Joe Mauer got three chances. You can watch them here, but below, I've also included .gifs of each chance for your convenience. The footage makes it clear just how easy a time Mauer had, despite all the pressure. Let's go one by one.

Here's Mauer's first fly ball. The batter hits it, then Mauer runs over and catches it. Mission accomplished. One does note some awkward footwork. If one were to watch this clip in isolation, one would not be surprised to learn that the player is inexperienced. But the catch was made.

Here's Mauer's second fly ball. The batter hits it, then Mauer runs over and catches it. Mission accomplished. Again, there's some awkward footwork. It's understandable. Good right fielders seldom backpedal. But Mauer still got in position, and Mauer still made the catch. And, two hands! He's got the fundamentals!

And here's Mauer's third and final fly ball. The batter hits it, then Mauer moves over and catches it. Mission accomplished. And more significantly, the awkward footwork is gone. There's nothing awkward about this play at all. If one were to watch this clip in isolation, one would think, "That is a nice routine catch by that experienced right fielder."

As Joe Mauer proved Thursday night, right field is the easiest job in the world. It takes zero experience to do the job, and it takes minimal experience to look good doing it. It is literally more difficult to watch a whole baseball game than it is to play right field in one.