In college, I finished second in my bracket pool for three straight years, including once to my mother. So if you're looking for solid, competent picks with no killer instinct down the stretch, continue reading!


Matt Ufford and Nick Fasulo break down the South

Region Subtitle: The J.C. Penney Region. It's full of name brands. The Round of 32 could feature a matchup of this year's No. 1 overall seed and last year's national champion. You've got historical programs like Duke and Indiana, as well. This one feels like the toughest region, just because of the names involved.

Chances Of Chalk (the top four seeds making the Sweet Sixteen): Decent. All four top seeds could face interesting Round of 32 matchups -- Kentucky versus either UConn or a fascinating Iowa State squad, Indiana versus Pomeroy favorite Wichita State (the Shockers rank 10th in Pomeroy's rankings, Indiana 11th), Baylor versus a UNLV squad that moves the ball wonderfully and can play physically against Perry Jones III and company, and Duke versus either Xavier or Notre Dame. It is unlikely that all four top seeds will survive to the Sweet 16, but it is difficult to immediately predict which one is most likely to fall.

Underrated: Baylor. The Bears were properly seeded, but the Scott Drew Factor is at play, and people will most likely overreact to the Bears' previous failings and, potentially, pick UNLV to take them out in the Round of 32. Drew has earned the reputation of a strong recruiter and iffy development-and-game-coaching guy, but it is worth noting that Baylor went 26-2 versus teams outside of Ken Pomeroy's Top 10 (i.e. teams not named Kansas or Missouri) this season, and the only Top 10 teams in the region are on the other side of the bracket. (Duke ranks just 17th.)

Overrated: Duke. At 27-6, the Blue Devils were an easy 2-seed, but they are not without flaws, most of them on the defensive end. They do not force turnovers, they allow solid interior scoring, and they are vulnerable on the defensive glass. A long, active team like Baylor, with Jones and workhorse Quincy Acy, could give them fits, if Xavier and 7-footer Kenny Frease don't take them out first.

The Pick: Kentucky. There are plenty of hurdles for this always-young team to clear, but the Wildcats were simply the best team in the country in the regular season, and their defensive prowess gives them an obvious edge.

Chances Of Chalk: Decent. This is a fascinating region from a matchups perspective. If Michigan State and Memphis meet in the Round of 32, both offenses will be at a disadvantage against tremendous field goal percentage defenses. A Davidson team that made its living on the offensive side of the ball, shooting relatively well and avoiding turnovers, faces a Louisville team that wins games by forcing bad shots and turnovers. Missouri could face either a slow-it-down-and-dominate-the-glass Virginia team or a Florida team that could make them pay for iffy 3-point defense in the Round of 32. Third-seeded Marquette will draw, oddly, a play-in game winner. Murray State and Colorado State each draw fouls at very high rates. Plus, potential Elite Eight battles like Louisville-Marquette III or Michigan State-Missouri (full of strength-versus-weakness matchups) could be intriguing, too. In all, I am picking chalk above, but I am not confident in that.

Underrated: Memphis. Going by Pomeroy ratings, Memphis is the No. 3 team in the region, and if they escape a rough battle versus St. Louis, yet another Top 15 team, they will have to face Michigan State in the Round of 32. The Tigers blew quite a few early-season opportunities -- they lost to Georgetown in overtime, to region-mates Murray State and Louisville by single digits, and to Michigan and Georgetown (again) in starting the season 6-5. But their post-Christmas work was discounted by the selection committee. They have looked like Old Memphis for most of the last month, beating UAB by 34, East Carolina by 23, Central Florida by 29 and 31, Marshall by 20 and 26. They slipped up against UTEP in mid-February, but their resume still took shape much more like a 6-seed than an eight.

Overrated: Colorado State. The Rams are proof that the committee uses strength of schedule in an incredibly incorrect manner. As Charles Barkley artfully (and awkwardly) pointed out to selection committee member Mike Bobinski yesterday, the Rams were 0-7 on the road versus Top 100 teams, but they scored a tournament bid because their non-conference slate ranked 26th, and they scored three solid home wins in-conference (UNLV, San Diego State, New Mexico). They were "rewarded" for playing a tough schedule, when the main sources of their strong strength of schedule were a 23-point loss to Duke and the fact that their cupcakes were better than other teams' cupcakes. In terms of actual performance, the Rams were iffy at best; even discarding their road record, the Rams ranked just 76th in Pomeroy's performance rankings, good for 14th in the region behind both potential 14-seeds (No. 50 BYU, No. 57 Iona), the 13-seed (No. 68 Davidson), and the 12-seed (No. 37 Long Beach State). Of course, in Murray State, they drew the 11th-best team in the region (according to Pomeroy), so they may advance to the Round of 32 regardless.

The Pick: Missouri. We are disrespecting the hell out of Tom Izzo and Michigan State at this point -- virtually everybody is picking the Tigers, it seems -- and that will almost certainly backfire, especially with the potential for Missouri to slip up against Florida/Virginia or Marquette. But I go with the smoking hot team regardless, even though it makes me nauseous to pick my alma mater to go that far.


Matt Ufford and Nick Fasulo break down the East

Region Subtitle: The X-Files Region. Trust no one. Syracuse was skating by on close wins before stumbling against Cincinnati in the Big East Tournament. Ohio State has lost four of its last ten. Florida State looks wonderful in one moment (they took out both Duke and North Carolina to win the ACC Tournament), and capable of losing to Boston College the next. Wisconsin was 21-3 versus teams ranked worse than 20th in Ken Pomeroy's rankings, and just 3-6 versus Top 20 teams. Vanderbilt can shoot them selves into (Vandy 71, Kentucky 64) or out of (Indiana State 61, Vandy 55) any game, and they carry some tourney baggage, having lost their last three Round of 64 games. Cincinnati can't really shoot. The hottest team (Florida State) sports losses to Princeton and 12-seed Harvard. Good luck figuring out this region.

Chances Of Chalk: Meager. Despite recent issues, Syracuse was still an easy 1-seed; however, they face a really interesting potential Round of 32 matchup with Kansas State. The Orange sport two primary weaknesses: they struggle on the defensive glass, and they can't don't draw fouls. KSU, meanwhile, is consistently one of the best offensive rebounding teams in the country, and they play an incredibly physical game -- they are the seppuku team of the tournament, getting themselves into foul trouble just to also get you into foul trouble. Beyond Syracuse, however, the chances for upset are also high. The Round of 32 could see either Wisconsin versus all-defense-and-no-pace Harvard (final score: 44-40, one way or the other) or a streaky-shooting Vanderbilt team that could take down anybody in the region on the right day. Florida State has all the tools to beautifully defend Ohio State in the Sweet Sixteen, but either Round of 32 opponent, Texas or Cincinnati, can match them physically.

Underrated: Texas. The Longhorns barely sneaked into the Field of 68, needing a nice win over Iowa State to confirm their bid. However, this ridiculously young team was close to something much better. Of their 13 losses, eight came by six points or less. As one would expect from a young team (of eight current rotation members, six are freshmen), they struggled to close out games, but most of the freshmen are pretty seasoned at this point. Plus, the 'Horns have one of the most dynamic streak shooters in the tournament in J`Covan Brown. Cincinnati is not dynamic enough to run away from them, and if they internalize their lessons learned during this tough season, they could make a nice run. Or not, of course.

Overrated: Cincinnati. The Bearcats improved their lot in life with a nice Big East Tournament run, but for much of 2011-12, they did not perform like a 6-seed. In fact, they rank below Round of 64 opponent Texas in Pomeroy's rankings. Their jumper comes and goes, and they are simply dreadful from the free throw line. They can throw games into chaos with their ability to force (and avoid) turnovers, but they are vulnerable on the defensive glass; really, they are just vulnerable in general. Maybe things have clicked recently -- they did take out Marquette, Georgetown and Syracuse in the last two weeks -- but as with everybody else in this region, I just don't trust them.

The Pick: Florida State. The Seminoles could make me feel very silly by not even making the Sweet Sixteen, but there's not a pick in this region that I like. This is potentially the most likely region to completely blow up, and I am even doing the silly thing and picking a 1-seed to lose before the second weekend. I already regret it.

Chances Of Chalk: Strong. Obviously John Henson's injury throws North Carolina for a bit of a loop, but the top four seeds are still quite a bit stronger than most of the rest of the region. Fifth-seeded Temple ranks just 36th according to Pomeroy, sixth-seeded San Diego State 52nd, seventh-seeded St. Mary's 43rd. In fact, the two best teams outside of the top four might be the 8-10 seeds. We could have two fantastic Sweet Sixteen battles here.

Underrated: Purdue. The 10-seeds are the fourth-best team in the region according to Pomeroy, ranking 24th overall (one spot ahead of streaky Michigan, whom the Boilermakers conquered by 14 points on February 25). Matt Painter's team has won six of nine, and while they probably wouldn't have much of an answer for Thomas Robinson and Kansas in the Round of 32, they could give themselves a chance with strong ball control and wonderful offensive efficiency. Creighton and Alabama are also a bit underrated.

Overrated: Temple. The tournament's other 5-seeds rank 10th (Wichita State), 13th (New Mexico) and 16th (Vanderbilt) according to Pomeroy. Fran Dunphy's Owls, meanwhile, rank 36th, behind, among other teams, California, their potential Round of 32 opponent. Temple earned a solid seed by going 13-2 after a January 14 loss to Richmond, and they beat three strong teams in Duke (at home), St. Louis (away) and Wichita State (neutral court). But they have been scraping by in the Atlantic 10 as of late -- they needed overtime to beat La Salle and UMass, then they fell to UMass in the A10 Tournament -- and could be in store for a short tourney stay.

The Pick: Kansas. With North Carolina still a bit of an unknown because of Henson, the Jayhawks are likely the steadiest team in the region. Tyshawn Taylor could either shoot Kansas to a national title or bumble his way to a loss to Purdue, but Robinson, Taylor and company are still in good shape to make a run here, especially in the St. Louis region.

Is this the year John Calipari gets his ring? With his recruiting style and the one-and-done rule, his teams are always incredibly inexperienced compared to so many other tourney teams, but that didn't stop them from making the Final Four last year. They are better, both offensively and defensively, this season, and they hold a distinct edge against all of their potential Final Four opponents in this bracket. 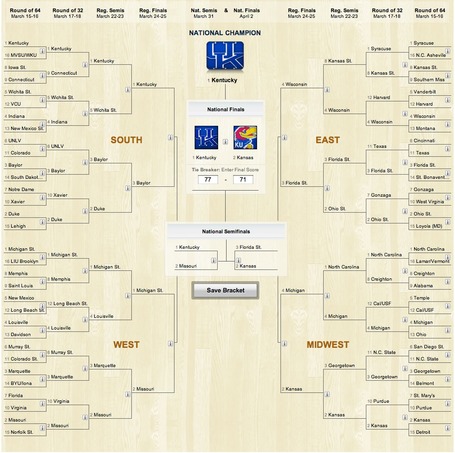