Well, it's that time of March. I've somewhat successfully made my guesses about who would make the field of 68, and it's time for one final challenge: actually picking the games. After two frankly miserable years in which I managed to go a combined 77-53 in my picks, with no Final Four teams, I'm not going to put too much thought or reasoning into these picks. It's March, the month where wild, amazing, wonderful and, yes, disappointing things happen. My philosophy is to put the bracket aside and enjoy the ride wherever it leads.


Breaking down the South region

First Four
16 Mississippi Valley State over 16 Western Kentucky
I'm going with the Delta Devils because I suspect the Hilltoppers may be looking ahead to a meeting with their Commonwealth neighbors.

Games That Could Go Either Way (Other Than The 8 vs. 9): VCU-Wichita State, though I think the Shockers are a bit more complete, particularly inside; UNLV-Colorado, as the Buffaloes may be peaking at the right time; and Xavier-Notre Dame, simply because I waited for days on end to pick against the both of them and now cannot.

Upset Explanation: While I don't think the Hoosiers will miss Verdell Jones III much against New Mexico State, his absence will create problems against a talented Wichita State squad.

A Word Of Caution: Given Baylor's inconsistency, they are a worthy pick to go out before they get the opportunity to meet a Duke team they might just beat this time around.

Final Analysis: This region sets up quite well for Kentucky, though the Bears could give them a serious game here, if they get their collective heads straight, like they did against Kansas in the Big 12 semifinal. That's a big "if," however.

First Four
14 Iona over 14 BYU
Teams I tend to miss in terms of selection typically win a game (or five) when action gets started.

Round of 64
1 Michigan State over 16 Long Island U.
8 Memphis over 9 Saint Louis
5 New Mexico over 12 Long Beach State
4 Louisville over 13 Davidson
6 Murray State over 11 Colorado State
3 Marquette over 14 Iona
7 Florida over 10 Virginia
2 Missouri over 15 Norfolk State

Games that could go either way (other than the 8 vs. 9): New Mexico-Long Beach State, though I suspect the Lobos' defense is a terrible matchup for the 49ers; and Murray State-Colorado State, which will feature better perimeter shooting than an NBA Three-Point Shooting Contest.

Upset Explanation: The Round of 32 in the West bracket provides plenty of opportunities to be wrong. Michigan State is playing its best basketball right now, as it should be, but Memphis will likely be ticked about its seeding, and motivated. New Mexico-Louisville could turn into the defensive battle of the Tournament. The bottom half of the bracket, on the other hand, will feature lots of small ball, with Murray State having a great chance if Isaiah Canaan gets hot from outside and Florida having a shot to upset Missouri if they can actually dictate tempo and get threes to fall.

The Racers' Run Will Likely End: This will probably be due to turnovers, something Murray State has had trouble with. Missouri is pretty good at nabbing steals.

Final Analysis: The Tigers may not be able to cope with the Spartans' defense, but they will certainly be motivated enough to give it a try, thanks to their placement on the No. 2 seed line.


Breaking down the East region

Games That Could Go Either Way (Other Than The 8 vs. 9): I'm tempted to take Harvard, but they don't have the size to take on Vanderbilt inside, even if the Commodores are often rudderless in the backcourt. If Cincinnati's offense shows up, Texas won't have much of a chance, but if you've watched the Bearcats recently, that may not be a big worry for Longhorn fans. Gonzaga is very much up against it, having to face a decent West Virginia team who was gifted a game not too far from campus.

(Lack of) Upset Explanation: This bracket sets up fairly well for the top four seeds, though Montana may give Wisconsin a game on Thursday in Albuquerque, and Andrew Nicholson may keep St. Bonaventure in its game with Florida State for 30 or so minutes. In this round, the biggest risk is Wisconsin over Vanderbilt. If the Commodores play with any sort of discipline, they can move on to Boston instead.

Going Chalk: Wisconsin will attempt to slow Syracuse down, and the Orange will collectively laugh at this tactic and grind a win out. On the other hand, Ohio State will also be challenged by Florida State, but the Seminoles will be playing a team that pays a little more attention on defense than North Carolina or Duke.

Final Analysis: As much as I want to pick the Orange, this is where I fear they pay for their inability to grab rebounds.

First Four
16 Lamar over 16 Vermont
The Catamounts' best chance will be to slow the Cardinals' down.

12 USF over 12 California
Every time I watch the Golden Bears, they seem to lack motivation. The Bulls will simply be able to lull them to sleep.

Games That Could Go Either Way (Other Than The 8 vs. 9): Michigan will fall if they can't get any shots to fall inside, as Ohio's perimeter defense is quite impressive. N.C. State gets the benefit of the doubt from me, simply because I didn't pick them in my final projection. Belmont may be due for an upset, but I've said that before and the Bruins have never been able to break through. This year's St. Mary's and Purdue squads are quite similar, with impressive offenses and sketchy defenses, so that one truly is a coin flip.

Upset Explanation: Much like Michigan, Temple is going to have serious issues with Ohio's perimeter defense, should both win their openers on Friday.

Going Chalk: The run for the pair of Cinderellas will end here, though N.C. State may be able to stun Kansas if Mark Gottfried can keep his players on the court.

Final Analysis: The Tar Heels lack of consistency catches up to them. The fact this game will be played far closer to Lawrence than Chapel Hill doesn't help matters.

Final Analysis: I'm tempted to leave this blank, since there's a pretty good chance none of these teams actually make it to New Orleans, but if I must ... Kentucky will have too much inside for Missouri, while Ohio State will relish the opportunity to play Kansas with a healthy Jared Sullinger available. In the championship, the Wildcats will cut down the nets after a titanic clash, though the Buckeyes may be able to punch John Calipari's team in the jaw frequently enough to earn a mini upset and the trophy.

Now, go and fill in the reverse of just about everything you've read here. On second thought, don't take any 16 seeds to top any No. 1s. 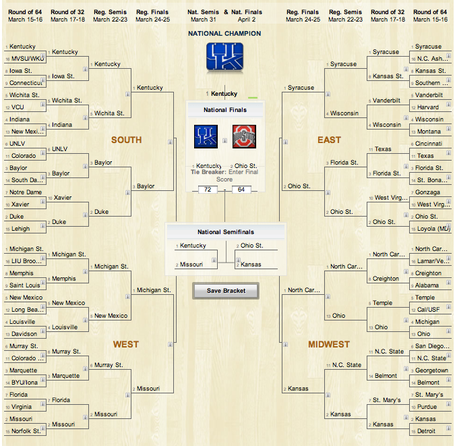