If playing the opening game of the NCAA Tournament isn’t to get the juices of the players on the Western Kentucky Hilltoppers and Miss Valley St Delta Devils flowing, maybe looking just off the court and seeing the president of the United States will do the trick.

President Barack Obama, who released his NCAA Tournament picks earlier on Tuesday, arrived at the University of Dayton Arena in Dayton, Ohio, for the game between the Hiltoppers and Delta Devils just before tipoff. He is watching the game with British Prime Minister David Cameron. 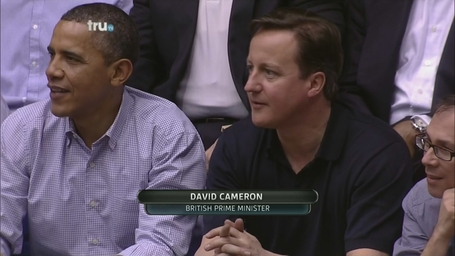 The White House says the attendance of the basketball game is intended to showcase the special relationship between the two key allies. Obama and Cameron will discuss the upcoming NATO and G-8 summits on Wednesday, followed by a state dinner at the White House.

This is the first time a sitting president has attended an NCAA Tournament game since President Bill Clinton attended the 1994 national championship game between the Arkansas Razorbacks and Duke Blue Devils. This is also the first time Cameron has ever attended a basketball game.