The degree to which the Iona Gaels dominated the BYU Cougars early in their NCAA Tournament First Four game was staggering. They appeared to be on pace for well over 100 points and BYU did not appear to belong on the same floor as their opposition as Iona jumped out to a 24-point lead. With four minutes remaining in the first half, they had 55 points. They would finish the game with just 72. This screenshot sums things up nicely. 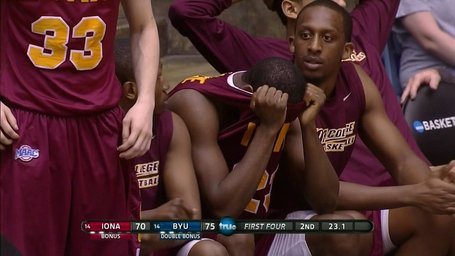 BYU scored the last nine points of the first half, then outscored Iona 38-17 in the second half in an improbable 78-72 comeback victory. Brandon Davies did a fantastic job down low with 18 points and 14 rebounds, while Noah Hartsock had a spectacular second half and finished with 23 points on 10-14 shooting.

The Cougars turned the ball over frequently in the first half while attempting to match Iona for pace and playing man-to-man defense. In the second half, BYU stopped turning the ball over, taking away Iona's opportunities to score in transition. They also switched to a zone in half-court defense, which Iona was unable to figure out.

Sean Armand scored 10 points in a fantastic first-half performance for Iona but did not score in the second half. After dishing out nine assists in the first half, Scott Machado had just one dime the rest of the way. The Gaels ended the game shooting just 44 percent from the floor and 6-25 from behind the arc, numbers that are almost unfathomable given how spectacularly they started the game.

BYU moves on to face the Marquette Golden Eagles on Thursday.

For more on Brigham Young, head over to BYU Cougars blog Vanquish The Foe. Stick around SB Nation's NCAA Tournament hub for a complete printable NCAA Tournament bracket and more.