Share All sharing options for: Ohio State Vs. Loyola Delayed By Broken Net

There's not a ton going on in the NCAA Tournament right now. UConn forgot to show up and is starting to finally come alive against Iowa State, but it's not incredibly entertaining at the moment. However, we did get a peek at a broken net and a man on a ladder trying to repair it in the early moments of Ohio State-Loyola!

Here's how it broke:

Here it is being fixed: 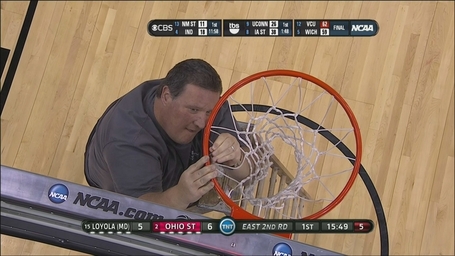 Look at that concentration! Also note he could not thread the thing for the life of him. But he did finally get it, and we're back in business.