After leading by just five points at the half against Long Island, Michigan State turned on the afterburners and dusted the Blackbirds in the second half for a 89-67 victory. Draymond Green had a little something to do with that. 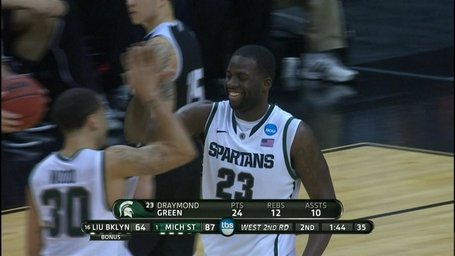 His last assist was the sort of nifty pass one does not expect a large, plodding forward to make:

Derrick Nix backed up Green with 18 points and eight rebounds.

Long Island, after riding hot shooting and balanced scoring in the first half, couldn't keep up in the second. Jamal Olaswere finished with 17 points, and C.J. Garner and Julian Boyd each had 15 points, but with no other Blackbirds entering double figures, it wasn't nearly enough.

Michigan State advances to play Saint Louis, which claimed its Third Round spot with a win over Memphis earlier on Friday.