NCAA Tournament 2012: One Top Seed Falls, Another Gets Pushed To The Brink

A historically low offensive output led to Michigan State's exit from the 2012 NCAA Tournament, while fellow one-seed Syracuse nearly suffered a similar fate against Wisconsin in the Sweet 16.

Share All sharing options for: NCAA Tournament 2012: One Top Seed Falls, Another Gets Pushed To The Brink

Thursday was supposed to deliver the most competitive crop of games the tournament has seen thus far, a promise made by, well, me. While Syracuse vs. Wisconsin lived up to that billing, Florida, Ohio State and Louisville all wound up winning by double digits.

I'm sorry. I have a lot of other qualities that people like, though. I'm good with kids and I know the lyrics to a lot of songs that most people don't. I bake pies.

Anyway, I think all this means is that we're due for at least three buzzer-beaters between now and the first Monday in April. It has to. It's basic science.

The field of potential national champions has been whittled down to 12. Here's how we got here.

Syracuse shot 55 percent from the field - well above the 38.5 percent Wisconsin had been allowing this season - but to hold their breath until misses by Jordan Taylor and Josh Gasser in the final seconds before celebrating a one-point win over the Badgers in the Sweet 16.

"I can't tell you how good it feels to win a game like this,'' Syracuse coach Jim Boeheim said. "This was a great, great game.''

The Orange were also 5-of-9 from 3-point range, much better than the 28.8 percent the Badgers had allowed all season, and scored 11 points more than Wisconsin's Division-I-leading defensive average of 53.0 ppg.

C.J. Fair was the surprising hero for Syracuse, scoring 15 points on 7-of-9 shooting. He had scored just 20 points and made only seven of his last 27 shots over SU's past six games.

The win was Boeheim's 48th in the NCAA Tournament, moving him past legendary UCLA coach John Wooden and into fourth place on the all-time list.

WHO WON IT THE BEST: Ohio State

The 15-point margin of victory was the night's largest, so, yeah, that's why we're here.

Even though Cincinnati made things interesting for a spell in the second half, it was clear from the get-go that the Buckeyes were the superior team. Deshaun Thomas and Jared Sullinger have emerged as the most lethal inside combination in the tournament, and are the main reason most oddsmakers currently have Ohio State as the second choice to win it all behind Kentucky.

The senior captains and leading scorers for the Golden Eagles each went just 5-of-15 from the field and did not handle the up-and-down pace Florida brought to the table as well as most figured they would. It was a disappointing joint effort that resulted in just 58 total points and the end of Marquette's season.

If you had to pick a most outstanding player for the tournament right this second, I don't see how it could be anyone other than Thomas. The big man was brilliant for the third straight game, scoring a day-high 26 points to go with seven rebounds.

The freshman man-child dropped 23 points on 8-of-10 shooting, including 3-of-5 from beyond the arc. He also had six rebounds, four assists, two steals and two blocks.

Hit 9-of-10 free-throws and scored 23 points to go with 11 rebounds. The sophomore forward also dished out three assists.

Hit 7-of-9 shots, scored a team-high 15 points to go with seven rebounds and four steals while playing 37 minutes in Syracuse's narrow victory over Wisconsin.

1. Tom Izzo's Understanding of the Rules

Tom Izzo did not understand and expressed his concern.

I'm not really "jeering" it, but it just seemed like it would be almost more cruel to put it in the "cheer" section. Basically, it's just a good picture and I'd like to share it with all of you. 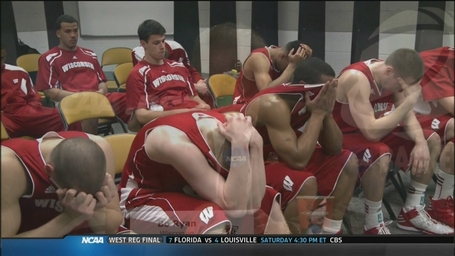 The 44 points scored by the Spartans was the lowest output by a No. 1 seed in the history of the NCAA Tournament since the institution of the shot clock.

4. Folks Who Get Mad At Jim Boeheim

It's all good. It humors him, keeps him young.

Mick Cronin had hoped that the talk of Gates being overmatched against Ohio Sate's Jared Sullinger and Deshaun Thomas would inspire the senior. Instead, Gates scored just seven points and snatched only five rebounds, while Sullinger and Thomas combined for 49 points and 18 boards.

With Louisville's win over Michigan State, the Cardinal coach moved to a remarkable 10-0 in the Sweet 16, four of those wins coming over better seeds. The only downer was that U of L's 13-point win actually dropped his former average margin of victory, which had been 23 points.

It didn't count for anything in this game, but there was a voicemail from a guy at "Rock N Jock" on his phone afterward.

We talked a little bit about his overall game above, but it was the way he scored (and how he looked doing so) on Thursday night that may have cemented his status as a one-and-done.

It was nasty. I mean that's a full swing right there.

The greatest of all-time was on hand to watch the Cardinals and Spartans duke it out along with fellow Louisville native - and new Chicago Bears running back - Michael Bush. 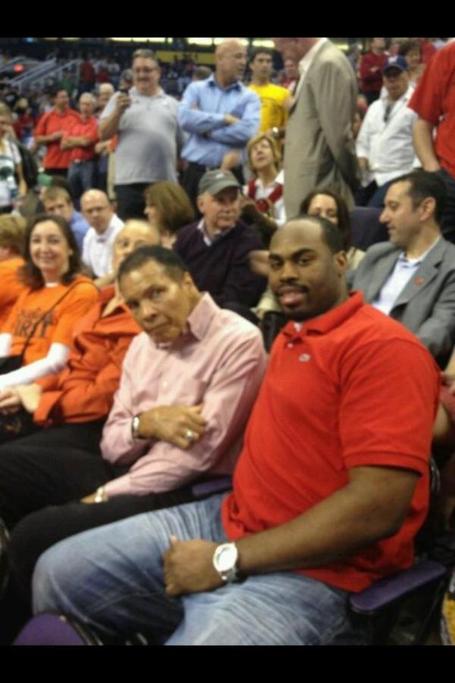 These were supposed to be the sexy, if not overly competitive, matchups, so maybe we're going to get a quartet of unexpected barn-burners.