No surprises here: the Kentucky Wildcats are going to the Final Four. Kentucky beat Baylor 82-70, and the result was never really in doubt as the Wildcats led by 20 at halftime and cruised to a win.

Anthony Davis led the Wildcats with a ridiculous (for anyone but him) 18 points, 11 rebounds and six blocks. Quincy Acy had 22 points and eight rebounds for Baylor in the loss.

The Wildcats advance to face in-state rival Louisville for a chance to go play for the national title. 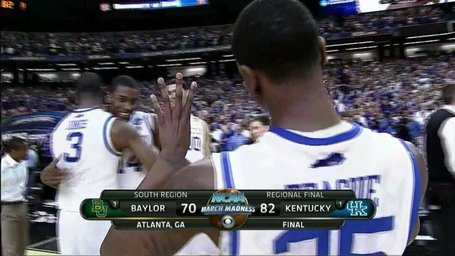 Here are some highlights from the game:

• Player(s) of the Game: Alien Anthony Davis had 18 points, 11 rebounds and six blocks for the Wildcats, in a typical fill-up-the-stat-sheet performance. Of course, take your pick with the Wildcats. Terrence Jones added 12 points, nine rebounds, six assists, three blocks and three steals while Michael Kidd-Gilchrist racked up 19 points (on just 10 shots!) to lead the Wildcats scorers.

• Humorous Moment of the Game: Quincy Acy "said it was his buttocks." Sure, I could provide the context, but wouldn't you rather just click that link?

• Scary Moment of the Game: Anthony Davis Injury. Fans of college and NBA hoops held their breath as Davis fell to the ground clutching his knee, but he appeared to be fine and returned to the game. Click that link to get more details about the injury and Davis' status.

• Random Incredible GIF of the Game: Imagine what this insane dancing Baylor fan would be doing if Baylor had been winning? VOTE: Good moves?

• Highlight of the Game: WHERE DID ANTHONY DAVIS COME FROM?