James Justice won the NCAA Slam Dunk contest, and it really shouldn't be a surprise to anyone who watched him take flight. At 5-foot-9, Justice was the smallest guy in the field, but also the highest leaper. Boasting a vertical somewhere in the neighborhood of 52 inches -- no, really -- Justice put on a show, playing well above the rim for each of his slams.

For instance, this was one of his backup dunks, after he missed a first attempt.

That's two young men, back-to-back in the key. While he didn't quite fly over them, he still dunked in rather ridiculous fashion.

And his last dunk -- the one that won him the contest? Well, it was something else. How about off the bounce, between the legs, with his head at rim level? Yeah, that.

This is what we like to call shutting it down.

You know he had to put the belt on after that one. 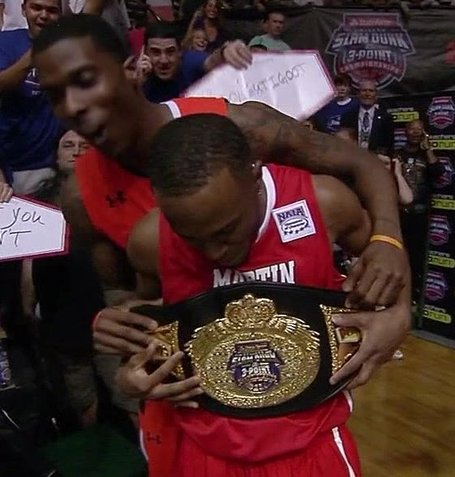 Justice easily won, pulling in a 49.4 in the final round.

For more on the dunk contest, which topped the NBA version, check out this StoryStream.