Final Four 2012: 10 Thoughts On A Wild Saturday In New Orleans

Share All sharing options for: Final Four 2012: 10 Thoughts On A Wild Saturday In New Orleans

1. Anthony Davis Is The Best Player In College Basketball

And it isn't close. On the same day that Davis completed a sweep of college basketball's national player of the year awards, the freshman showed why in Kentucky's emotional 69-61 win over Louisville.

Davis scored with a right-hand hook, and then he scored with a left-hand hook. His incredible two-handed dunk off of a tipped lob pass was surpassed later in the game by a one-handed finish in the same scenario. He blocked five shots, but his presence alone forced the Cardinals to miss probably 10-15 more shots around the basket.

Davis finished Saturday night with a Russell-esque line of 18 points, 14 rebounds and five blocked shots. A win on Monday and his attempt to match Russell's championship efficiency will be off to a good start.

2. Thomas Robinson Is Pretty Good Too

In a game that matched the preseason national player of the year against the guy many thought would take home the award at the season's midway point, Thomas Robinson showed why he is the country's most improved player and a consensus first-team All-American.

The 6-10, 237-pound Robinson scored 11 of his 19 points in the second half and carried Kansas to a gritty 64-62 win over Ohio State. His defensive presence and commanding of the ball in the post helped morph the game from an up-tempo offensive showcase to a much uglier slugfest that better suited the Jayhawks.

Robinson helped hold Jared Sullinger to 13 points on 5-of-19 shooting, and assisted in limiting Deshaun Thomas -- who had entered the game as the Final Four's leading scorer -- to nine points. He played with a fire that seemed to hint that he believed he was snubbed by some of the player of the year voters, although he insists that wasn't the case.

"That don't even matter no more," Robinson said. "I threw the player of the year thing out the window. It seemed like everybody wanted to give it to him anyway. I get a chance Monday to win a championship."

There is a very strong contingency of Kansas fans in New Orleans, and a healthy amount of Louisville and Ohio State fans stuck around for last night, but make no mistake about it, Kentucky fans are running this city right now.

"They are everywhere," said one New Orleans native of the "Blue Orleans" presence on Bourbon Street. "And they drink a lot so I don't think anywhere around here is complaining."

They're also acting slightly more civil than their brethren in Lexington. 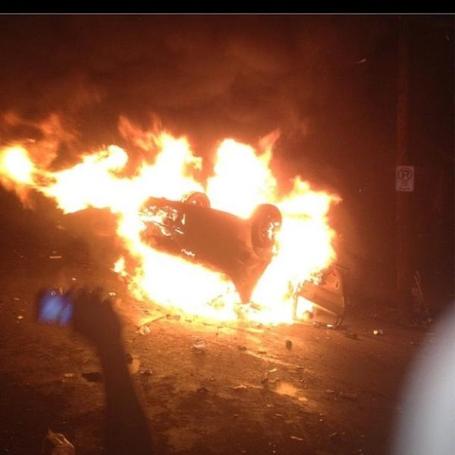 4. The Kentucky/Louisville Intensity May Never Be Topped At A Final Four

The minutes leading into the biggest basketball game in the history of the state of Kentucky were almost surreal. The blue side launched into their standard "C-A-T-S, CATS! CATS! CATS!" cheer, while the red side responded with their time-tested shout of "C-A-R-D-S." Any time a Louisville or Kentucky highlight appeared on the big screen, the fan bases shook the Superdome with approval or disapproval.

"This is too much," said the Louisville fan sitting to my left. "I can't take this. It's too much."

"This is insane," a neutral spectator outfitted in a green shirt sitting to my right said moments later. "I mean ... this is f---ing insane."

Things settled down (relatively) a bit once the actual game started to be played, but I'm not sure college basketball will ever see a pregame more intense than the one it saw in Saturday's opener. And I hope it doesn't. It really was almost too much.

Yes, he has an embarrassment of talent, and yes, you, me and your mom probably could have led this Kentucky team to 20-25 wins, but I'm not sure there's another coach in college basketball who could do what John Calipari has done over the past seven seasons. To understand the difficulties that come with having to manage NBA players-in-waiting, just look at what happened to Connecticut this season.

In three seasons at Kentucky, Calipari is a ridiculous 101-14 and still has not lost a game at home. If the Wildcats defeat Kansas on Monday, then one of the only two arguments the anti-Cal crowd has left will be taken away forever.

6. A Final Four Marketing Person Has Some Explaining To Do This Morning

On top of every seat at the Superdome on Saturday was a Final Four seat cushion. A nice memento for folks who made the trip to the Big Easy to bring back home with them, right? Except you have to realize that these fans are cheering for teams playing on college basketball's biggest stage, and when such a supreme victory or defeat takes place, if those fans have something they can throw out of joy or frustration, they're probably going to throw it.

The seat cushions started raining down from the upper deck before the final horn sounded in the Kentucky/Louisville game. It was impossible to tell whether they were celebratory or frustrated tosses, but it was quickly evident that they were contagious. Blue and red folks alike chucked the seat cushions from the 600 level down onto the somewhat-annoyed, somewhat-scared spectators below.

It happened again about two hours later, but with about twice as much vigor. This time, there was no question that the act was overwhelmingly celebratory as it was almost totally limited to the Kansas cheering section. Still, after a while, Jayhawks fans looked like they wanted to keep cheering the win instead of keeping their head on a swivel so they didn't get jacked in the face by a launched projectile.

Don't give fans at big sporting events keepsakes that can be thrown.

7. Rick Pitino Still Has It

Two months ago, Louisville was a team that couldn't put the ball in the basket, had players who shouldn't be playing in the Big East and a head coach who was watching the game pass him by. On Saturday, Rick Pitino and the Cardinals were in the Final Four and tied with the No. 1 overall seed with nine minutes remaining.

It's debatable whether or not the Cardinals have an eventual NBA player on their roster, but they turned their season from mediocre to historic by simply outworking opponents. That mentality starts at the top, and Pitino may have just given the best March performance of his career, which is saying something.

8. Everyone In New Orleans Has A Picture With "In The Face Guy"

I'm serious. I haven't met anyone who hasn't seen actor Rob Riggle -- aka the "in the face" cop from The Hangover -- and taken a picture with him.

Turns out Riggle is a monster Kansas fan, so much so that if you ask to give a "go Cats" or finish an "O-H" cheer, he won't do it.

NOT UP IN HERE.


Nick Fasulo on the Jayhawks' win

9. This May Be Bill Self's Finest Hour

Just six days after a masterful Elite Eight win over his predecessor, Bill Self made all the right moves in erasing a 13-point deficit and knocking off Ohio State to take Kansas to the national championship game for the second time in five years.

Taking everything into consideration -- the ticket scandal, the ineligible freshmen, Tyshawn Taylor starting the season with more off-the-court trouble, the talent lost from last year's team, the fact that the Jayhawks have zero McDonald's All-Americans -- this has to be considered one of the best coaching jobs ever performed at one of college basketball's most storied programs.

10. Officially The Year Of The Rematch

For the first time ever, all three Final Four games will be rematches of regular-season contests. In both of Saturday's games, the team that prevailed earlier in the season also advanced to the national title game. Kentucky fans will take comfort in the fact that the Wildcats took care of business against the Jayhawks with a 75-65 win back on Nov. 15.

Of course, if KU fans are looking for a loophole, this is also a coaching rematch of the 2008 championship game, where Self and the Jayhawks shocked Calipari and Memphis in the final minute and won in overtime.