How Often Are NCAA Championship Games Exciting? And Other Questions

In 2010 we saw one of the most exciting championship games in NCAA Tournament history. In 2011, we saw the very worst. So what are we in for Monday night? Here's a look at a few statistical trends.

Share All sharing options for: How Often Are NCAA Championship Games Exciting? And Other Questions

Remember the 2010 NCAA Championship Game? It delivered in spades. It pitted a top-seeded supervillain, Duke, against Butler, a likable, upstart 5-seed, and in the latter's home city. It was a college basketball game, so it certainly wasn't perfectly-played, but in terms of excitement, it left nothing to be desired. Every time Duke began to pull away, Butler fired right back. At times it seemed as though the margin would never eclipse two points; the scoreboard could just as easily have been measuring the progress of a duckling, waddling forward by gingerly sticking one foot out in front of the other. Gordon Hayward's buzzer-beating half-court heave was about three inches away from becoming perhaps the most memorable shot in the history of basketball. Instead, it missed, and the game-winner took place in our imaginations, where it was probably more spectacular anyway.

Remember the 2011 NCAA Championship Game? Well, don't! Stop it! It was the least fun championship game I've ever seen in any sport. Connecticut and Butler had some talent between them, but little of it seemed to surface during UConn's 53-41 win. The Bulldogs shot 12-for-64 from the field -- that's .188, in other numbers. As I watched it, I didn't feel like I was engaging in a recreational activity. It felt like I was babysitting or something, just making sure it didn't eat any crayons.

Indeed, one of the best NCAA Championship Games in history was followed up the next year with the very worst of all time. So which game will Monday night's Kansas-Kentucky match-up resemble more closely? I think it's safe to say that, given the quality of the teams, we're in for something much better than UConn-Butler. But we may as well take a look at the record books and see the sorts of games the NCAA Championship typically delivers.

So, first of all, the impartial observer wants to see a close game. 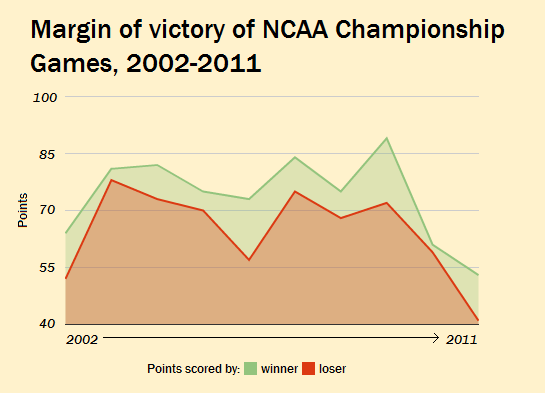 Of the last 10 championships, two have ended as one-possession games. One was a two-possession game. Though none were full-on blowouts, a few of them were pretty one-sided.

The average margin of victory was 9.2 points. That's roughly the average we would expect of any two given college teams duking it out, but the two teams we're talking about are, by and large, the best of the best. It would be nice to see a few more close finishes. 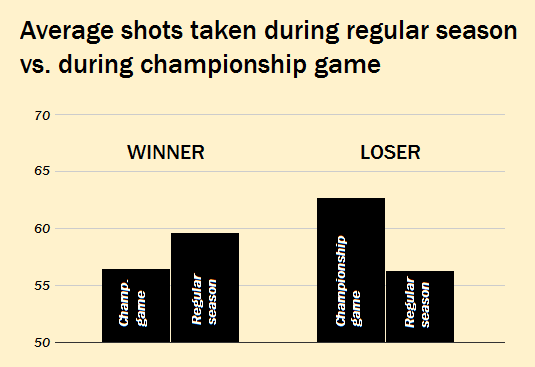 The obvious takeaway here is that the winning team is usually the team that's able to maintain the pace and shot tendency it's accustomed to -- in fact, NCAA Championship winners take an average of three fewer shots per game than they usually do. In contrast, the losing team tends to chuck up over six more shots than they usually do. Some of that can probably be attributed to the truth that the losing team will naturally put up shots with greater haste in the final minutes, but probably not, like, six more shots. It seems as though remaining true to your own game plan is of great importance when you're playing on a stage larger than you might be accustomed to.

And, finally: I got curious, and decided to look up how many future NBA players appear in NCAA Championship game. Over the last decade:

There's no real year-over-year trend to observe here -- obviously, the numbers drop off in recent years because several of those dudes are still in school. I do find it interesting, though, that such a disproportionate number of future NBA players make it all the way through a one-and-done tournament that doesn't necessarily reward the better team. Indeed, historically speaking, almost half the people you see on the floor of the NCAA Championship Game are NBA-caliber talents. It doesn't figure to be any different this year.

By the very nature of the NCAA Basketball Tournament, the championship game tends to carry an anticlimactic air with it. It's just the way it goes: at the outset, you're keeping track of a half-dozen wild and wacky games simultaneously on a Thursday afternoon while you're supposed to be working. It's a pleasant break from the routine. And at the end we have one game, played on a Monday night, between two teams you probably aren't personally invested in.

So in order to be memorable, an NCAA Championship has to be especially great. If it isn't, and someone walks up to you in July and asks you who the reigning champion is, you might not even remember. And if it's anything like UConn-Butler ... well, I'm going to leave electricity forever and live the quiet life of a farmer, never to visit this society again. You just bury seeds in the ground and shit just starts growing, right? Eh, I'll figure it out.